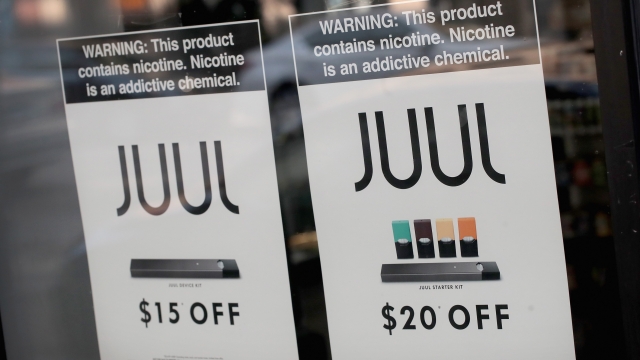 SMS
39 States To Investigate Juul's Marketing Practices
By Antoinette Miller
By Antoinette Miller
February 25, 2020
They're looking into whether Juul intentionally targeted its ads at young people and whether it misled them about its products' health risks.
SHOW TRANSCRIPT

Thirty-nine states are standing behind a bipartisan investigation into Juul Labs' marketing practices. The states say they're exploring allegations that the company intentionally targeted young people and misled them about its products' nicotine content.

Connecticut, Florida, Nevada, Oregon and Texas are spearheading the investigation. Nevada's AG said "preying on children and those looking for help to quit smoking," as Juul has been accused of doing, is "despicable."

Several states have sued Juul over its alleged role in an "underage e-cigarette smoking epidemic". Those lawsuits say Juul was dishonest about its products' nicotine content and health risks. Juul bills itself as a way for adults to quit traditional cigarettes, but its products still contain nicotine.

According to the Food and Drug Administration, cigarette use among high schoolers is at an all-time low, but e-cigarette use has risen "dramatically."

In September, just as CEO Kevin Burns announced he would leave Juul, the company said it was suspending all "broadcast, print and digital product advertising in the U.S."

Juul maintains that its products, "marketing and commercial communications" are only intended for adult smokers, not teenagers or children. But in February, reports surfaced that Juul had previously bought ad space on children's sites such as Cartoon Network and Nickelodeon. Juul has denied those allegations.

In the past, Juul's ads featured young adults, whom it says fit its target audience of 20-to-30-year-olds. The company recently stopped selling fruit- and mint-flavored products, which critics said appealed to children, and began applying age restriction technology to its sales.

Of the investigation, Connecticut Attorney General William Tong said, "I will not prejudge where this investigation will lead, but we will follow every fact and are prepared to take strong action in conjunction with states across the nation to protect public health."