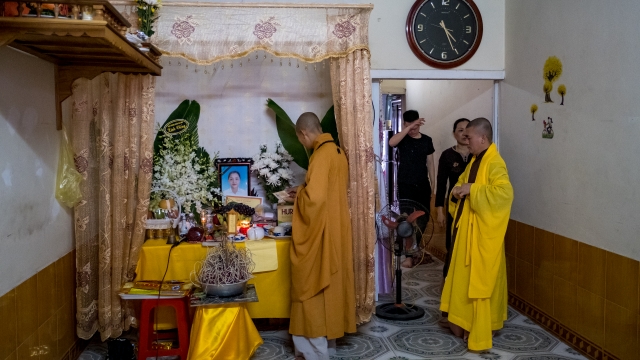 SMS
Essex Police: 39 People Found Dead In Truck Believed To Be Vietnamese
By LeeAnne Lowry
By LeeAnne Lowry
November 3, 2019
Officials initially said the bodies were were believed to be Chinese "based on the documentation found on them," but later walked back that statement.
SHOW TRANSCRIPT

Essex Police say the 39 people who were found dead in a refrigerated truck container in October are believed to be Vietnamese nationals.

Assistant Chief Constable Tim Smith made the announcement Friday. Authorities are in contact with the Vietnamese government and families in Vietnam and the U.K.

Thirty-one of the deceased were men and eight were women. Officials initially said they were believed to be Chinese "based on the documentation found on them," but later walked back that statement.

Police are still in the process of identifying the bodies, using the internationally-recognized Interpol Disaster Victim Identification standards. They say the process uses I.D. methods including dental comparison, fingerprints and DNA to identify bodies in a "dignified manner, taking into account the needs of the investigation process, the needs of the bereaved and the needs of the community."

The 25-year-old suspected driver of the truck faces 39 counts of manslaughter, as well as human trafficking and immigration offenses.