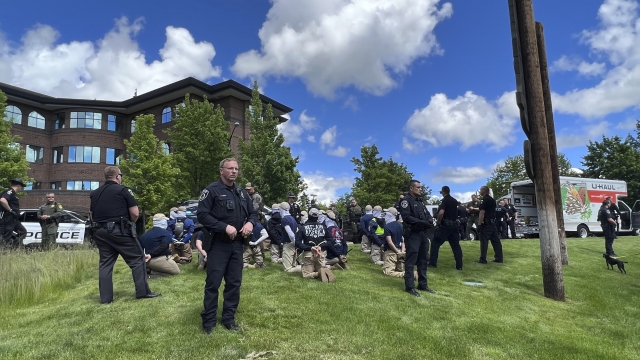 A tipster phoned police saying a group of men clad in the same clothing loaded up in a U-Haul. Some had shields and body armor.

In Idaho, police arrested 31 members of Patriot Front, a fascist, white nationalist group whose goal is  creating a white, Christian-only American ethnostate."We made a command decision to make the stop prior to them getting downtown to prevent the riot from happening," Coeur d'Alene Police Department Chief Lee White said. "As it turns out, the stop occurred less than a quarter mile from city park. I have no doubt in my mind that had that van stopped at the park, or much near the park, that we still would have ended up in a riot situation."Over the weekend, the group intended to disrupt an LGBTQ pride event in Couer d'Alene. A tipster phoned police saying a group of men clad in the same clothing loaded up in a U-Haul. Some had shields and body armor."And so let me be very, very clear — let me be very clear here. These were not law enforcement officers that we arrested," White continued. "These were members of the hate group Patriot Front. These were not antifa in disguise, nor were they FBI members in disguise." Among those arrested: Patriot Front's leader, 23-year-old Thomas Rousseau of Grapevine, Texas."They admire fascists of the past. And, you know, their big slogan is reclaim America, which is this idea of like just bringing back America to some sort of ancestral European heritage," Southern Poverty Law Center Spokesperson Michael Edison Hayden said.Extremism researchers say Patriot Front seeks rootless, white males, drawing ideological purists who want a race war in America.  "When influencers, hard-right influencers who work in disinformation and essentially, push these inflammatory narratives day and night on social media, get invested in pushing something, eventually, it leads to action by extremists," Hayden continued.The group targeted the LGBTQ community, and other fascist groups have done the same. Also this weekend, The Proud Boys, another documented violent extremist organization, sought to disrupt a pride event in Arlington, Texas, hectoring the crowd assembling inside a sports bar.  "This is part of a yearslong campaign that Patriot Front and other extremist organizations have been engaged in, not just to to terrorize target groups, but also to push the overton window into getting the Republican party, getting conservatives — and particularly, fans of Trump — to be more accepting of more extreme behavior," Sparverius CEO Kristofer Goldsmith said.The goal, analysts say, isn't just to intimidate and terrorize, but to influence right-wing politics and get a seat at the Republican party."They're taking the worst lessons of fascism and national socialism of the 20th century and they're applying it to the digital age," Goldsmith continued. "That's why Thomas Russo and his little neo-Nazi club engages in these flash mob style stunts so that they can get a bunch of social media attention and find the next the next recruit, someone that they can radicalize from being just a racist piece of trash into a full blown neo-Nazi who can repeat every fascist slogan that's ever existed."