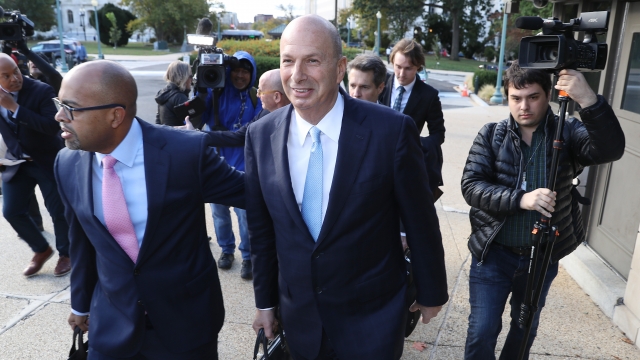 Three women have accused Gordon Sondland of sexual misconduct, according to ProPublica. The women also say he retaliated against them after they rejected his advances.

Sondland is the U.S. ambassador to the European Union and a key figure in the impeachment inquiry into President Donald Trump. The allegations date back to before he became an ambassador.

One of the accusers is Nicole Vogel, the owner of Portland Monthly magazine. ProPublica teamed up with the magazine to tell this story, but it says she was not involved in editorial decisions. Vogel said she shared her story because "it feels like the right thing to do."

Vogel said Sondland invited her to dinner in 2003 to discuss her magazine and possibly investing in it. She said she declined a kiss from Sondland, and that he later rescinded a deal to put her magazine in the rooms at his hotels.

Natalie Sept, who worked on a Portland City Council member's campaign, also says Sondland tried to kiss her. She says Sondland spoke to her about job opportunities but never followed through after she rejected him. And Jana Solis says Sondland made two unwanted sexual advances after he hired her and that he later shouted at her over an issue "tangential" to her job.

Sondland denied the allegations in a statement to ProPublica. He wrote: "These untrue claims of unwanted touching and kissing are concocted and, I believe, coordinated for political purposes. They have no basis in fact, and I categorically deny them."

Sondland's lawyer, Jim McDermott, said the women have one thing in common: that they pursued Sondland "for financial and personal gain." He said he believes the three women are trying to undermine the credibility of Sondland's testimony.