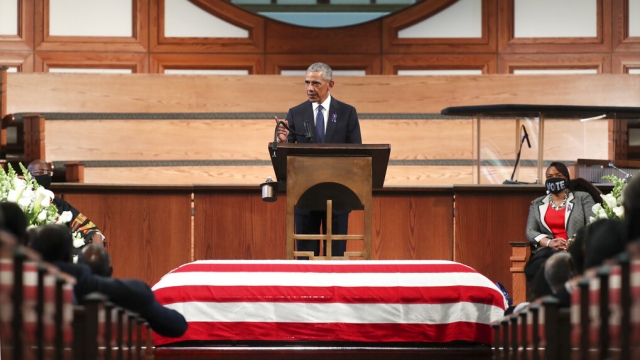 Today, civil rights activist and the often-called "conscience of Congress" John Lewis was laid to rest.

“A friend that would walk the stony roads he’d ask you to walk. That would brave the chastening rods he asked you to be whipped by. Always keeping his eyes on the prize . Always believing none of us would be free until all of us are equal. I just loved him,” said former President Bill Clinton.

“John and I had our disagreements, of course. But in the America John Lewis fought for, and in the America I believe in, differences of opinion are inevitable elements and evidence of democracy in action,” recalled former President George W. Bush.

It was President Barack Obama who reminded the crowd of the moment Lewis and hundreds of other civil rights demonstrators were met with violence crossing the Edmund Pettus Bridge in Selma, Alabama, in 1965.

“Their bones were cracked by billy clubs. Their eyes and lungs choked with tear gas, they knelt to pray which made their heads easier targets, and John was struck in the skull, and he thought he was going to die,” said Obama.

He then drew parallels between that moment and what he says is happening today.

“George Wallace may be gone, but we can witness our federal government sending agents to use tear gas and batons against peaceful demonstrators. We may no longer have to guess the number of jelly beans in a jar in order to cast a ballot. But even as we sit here, there are those in power who are doing their darnedest to discourage people from voting by closing polling locations and targeting minorities,” said Obama.

Before his death, Lewis penned an op-ed to be published in The New York Times the day of his funeral.

Calling for people to vote and get into “good trouble”, he writes: "I heard the voice of Dr. Martin Luther King Jr. on an old radio. ... He said each of us has a moral obligation to stand up.”

And from the pulpit of the very church Dr. Martin Luther King Jr. called home, his daughter, Dr. Bernice King, echoed that call.