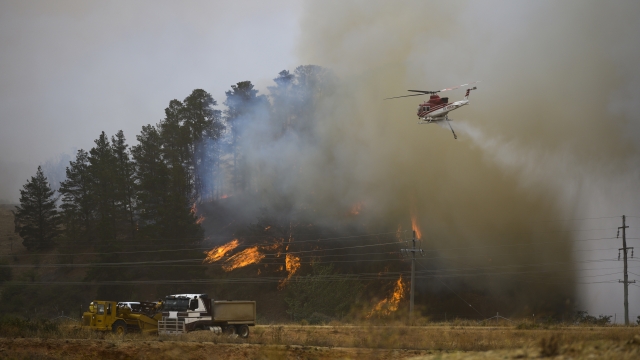 SMS
3 U.S. Firefighters Killed In Plane Crash In Australia
By Katherine Biek
By Katherine Biek
January 23, 2020
All three were on board a C-130 Hercules air tanker that crashed in an active fire zone south of the Australian capital of Canberra.
SHOW TRANSCRIPT

Three U.S. firefighters died in Australia on Thursday, where they were helping fight bushfires.

All three were on board a C-130 Hercules air tanker that crashed in an active fire zone south of the Australian capital of Canberra.

The firefighters worked for an aerial firefighting company called Coulson Aviation. The New South Wales Rural Fire Service had contracted the company to help battle bushfires in the state that continue to burn out of control.

Recent rainstorms had given Australians a break from the devastating bushfires that have scorched more than 25 million acres since September. But rising temperatures and damaging winds are now causing fires to flare up again. Canberra's airport briefly closed Thursday while firefighters worked to contain a nearby blaze.

In all, 33 people, including the three American firefighters, have been killed in the bushfires. The Australian Transport Safety Bureau is investigating the cause of the crash. In the meantime, Coulson Aviation is grounding their large aircraft as a standard precaution.