3 Things You Got Wrong About Steroids In Baseball 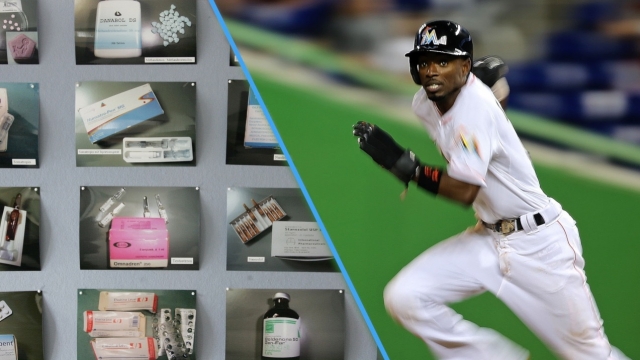 There are a few things some baseball fans don't get about steroids: like Dee Gordon's recent MLB suspension.

Skinny guys take steroids, too. That's been the takeaway for a lot of baseball fans after Major League Baseball hit Miami Marlins speedster Dee Gordon with a suspension for using banned substances.

Seeing a player who's never hit more than four home runs in a season get busted like this can be surprising for some, but Gordon's suspension highlights a few misconceptions baseball fans have regarding banned drugs.

No matter how many drugs athletes take, they won't gain muscle unless they work out. But when athletes take steroids, they can work out longer and recover quicker, making it that much easier to stay buff.

This means a guy like Dee Gordon — who insists he didn't knowingly take PEDs — probably wouldn't ever try to look like Mark McGwire, steroids or not. But Gordon has put on over 25 pounds since his MLB debut in 2011.

Although we often hear about big-name players getting busted for PEDs, the truth is that most of the players who've been suspended are still trying to make the big leagues.

These numbers are skewed a bit, of course. There are far more players in the minors than in the MLB, and there are plenty of folks who think some MLB players are getting away with PED use.

Lastly, at least on the big league level, a PED suspension doesn't mean a player's career is over.

Players like Nelson Cruz, Jhonny Peralta and Melky Cabrera have all signed sizable contracts shortly after getting hit with suspensions and have gone on to play well.

And keep in mind, baseball contracts are always guaranteed. This means once Gordon's suspension is up, he'll go back to earning money from the five-year, $50 million contract extension he signed this past offseason.