3 States Sue To Have ERA Added To U.S. Constitution 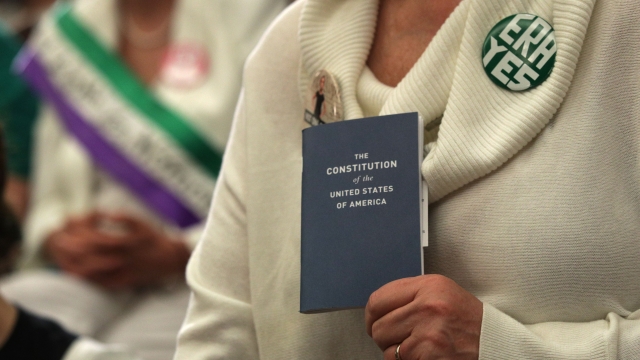 SMS
3 States Sue To Have ERA Added To U.S. Constitution
By Adam Elrashidi
By Adam Elrashidi
January 30, 2020
The attorneys general of Virginia, Illinois and Nevada are suing the national archivist to demand he ratify the ERA.
SHOW TRANSCRIPT

The attorneys general of Virginia, Illinois and Nevada filed a lawsuit Thursday to demand the Equal Rights Amendment, or ERA, be added to the U.S. Constitution.

The joint complaint — filed against the national archivist in the U.S. District Court in Washington — seeks to challenge a recent Justice Department memo that said the deadline for passage expired in 1982. The DOJ's opinion effectively blocked the archivist from certifying the measure.

The ERA bans discrimination on the basis of sex and was first passed by Congress in 1972. States originally had seven years to approve it, but only 35 had done so by a subsequent extension to June 1982. Virginia became the pivotal 38th state earlier this month and the attorneys general argue that by refusing to ratify the ERA, the archivist is acting out of pocket.

The archivist, though, has said the agency would continue to defer to the DOJ's opinion until "otherwise directed by a final court order."

Some conservative groups have raised concerns that the ERA, if adopted, could bolster laws supporting issues they oppose, like abortion and same-sex marriage. It's also worth noting that five states have rescinded their earlier ratifications, but ERA activists have questioned the legality of doing so.

During a conference call with reporters, Virginia Attorney General Mark Herring said the forces that have denied women equal protection under the law have not been "fully vanquished." But, he added, "the women in America have shown time and again, if you throw up roadblocks, they'll go over them, they'll go around them, they'll go straight through them."