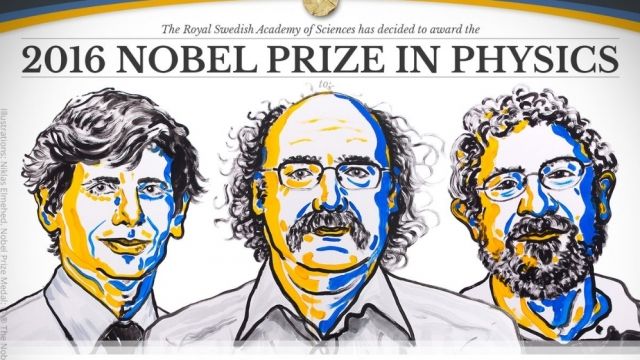 SMS
Physicists Win Nobel Prize For Exotic Matter Research. So What's That?
By Lindsay Gloor
By Lindsay Gloor
October 4, 2016
The prize was awarded to the three for their research in exotic states of matter, which other physicists are hopeful could be used in electronics.
SHOW TRANSCRIPT

David J. Thouless from the University of Washington was awarded half of the prize, and F. Duncan M. Haldane from Princeton University and J. Michael Kosterlitz from Brown University split the other half.

The British-born trio's research, done in the 1970s and '80s, discovered the secrets of exotic matter.

In grade school physics, most of us learn matter is a solid, liquid or gas. But these scientists discovered that extremely high and low temperatures can cause matter to change into a more exotic state.

Thanks to their work, more scientists have researched topological concepts, studying properties that change step by step.

The Academy hopes that materials found through this area of research can be used in future generations of quantum computers, which are often used in advanced medical science like gene mapping.