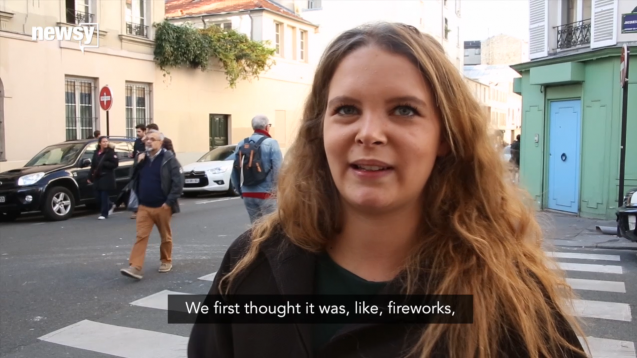 "I never thought I would witness something like this in my city and, more particularly, at my window," Charlotte Medinger said.

We asked Parisians what they were doing the night of the attack.

"We were just having chilling time in my flat, so we heard some noises. We just went to the window, and then we just saw a crowd just down there where there is the restaurant and the bar," Maya Ayasse said.

"What I was doing on Friday, actually, I was at my girlfriend's house, and we were, we wanted to go back to my house, but then we heard on our smartphone, we saw there was an attack, so we just changed our plans," Cyril Vauthier said.

"When I heard the explosion, I just ran to the window directly, and then I saw the scene," Medinger said.

"We first thought it was, like, fireworks, and I said, OK. No, there is no fireworks because then it start again, and so we are so afraid that we just lie down on the floor because it just happened here, and then we saw like the car of the two guys going down the street, there," Ayasse said.

"We just stayed at the window for, like, I don't know, 15 to 20 minutes, looking at everything and trying to understand what's happening. And then at some point, a cop told us: 'You must close the window because there is a bomb.' In the coffee and in the street, we didn't really know. So then, we closed the window, and we turned on the TV, and that's where we learned about the whole stuff happening in whole of Paris," Medinger said.