3 Great Storylines On Display In The 2015 Masters Tournament 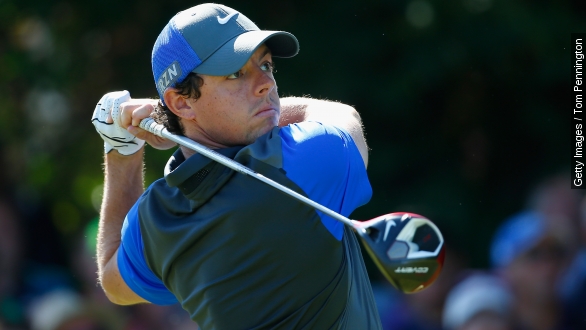 The 2015 Masters Tournament tees off Thursday from Augusta National with a few storylines to look forward to. Here's a quick preview.

"I had a burrito or two burritos ten days straight. While I was in Augusta. ... So, I won again, so I think this year we're going to do that again," Watson said.

Well, burritos must be doing the trick. And defending Masters Champion Bubba Watson might need some extra closet space if he wins.

A victory would give the perennial fan favorite a third green jacket in the last four years — a feat only the great Jack Nicklaus has accomplished. Plus, it's pretty tough not to root for him after this emotional comment he made about wanting to wrap his newborn son with his Masters jacket.

From an abundance of green jackets to zero green jackets. Rory McIlroy is on a quest to capture the illusive Masters title. If he does, he'd become just the sixth golfer in history to win a career Grand Slam. (Video via EA Sports)

McIIory is the No. 1 ranked player in the world and is arguably golf's top star. Upon winning the Open Championship last year, he joined Tiger Woods and Jack Nicklaus as the only three golfers to win three majors by the age of 25. (Video via OMEGA)

The New York Times Magazine recently published a lengthy piece detailing the young yet decorated champion's rise to fame. In the article, several golfers, including Tiger, admitted McIlroy's swing is one of the best they've ever seen.

Nike also released a video recently showing a young boy in the likeness of McIIory idolizing Tiger while growing into his own. Some media outlets wondered whether it was a symbolic passing of the torch from one generation to the next. (Video via Nike)

And, speaking of the golf legend ... he's back. Tiger has battled injuries, and his game too, but he returns from his brief tournament hiatus and sounds pretty determined to get back on track.

"I worked my ass off. That's the easiest to kind of describe it. I worked hard," Woods said.

Woods is a four-time Masters Champion, but those big wins happened ages ago. And he hasn't won a major since 2008.

Within the past year, Tiger was the No. 1 player in the world. But after a string of poor performances, the 14-time major champion dropped out of golf's top 100 list for the first time since 1996.

He's currently ranked 104, but there'll be plenty of eye balls watching to see if he can return to his former glory.

"I've been hoping for Tiger to have a comeback. I hope he has that comeback," Michael Wilbon said.

"I think he can win. I mean, I know that's insane. ... It would be the greatest story in the history of golf," Tony Kornheiser said.