3 Deaths In 1 Week: How Risky Is High School Football? 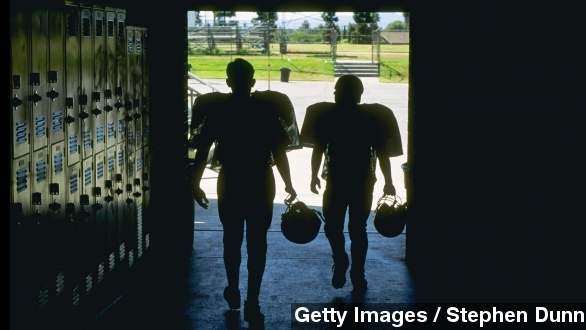 SMS
3 Deaths In 1 Week: How Risky Is High School Football?
By A.J. Feather
By A.J. Feather
October 3, 2014
A football player from Long Island was the third in a week to die of football-related injuries. These deaths renew concerns about the sport's safety.
SHOW TRANSCRIPT

Tom Cutinella was a junior at Shoreham-Wading River High School. He was pronounced dead after collapsing during the third quarter of a varsity football game.  But school officials say football is not to blame.

STEVEN COHEN, SHOREHAM-WADING SUPERINTENDENT ON WNBC: "It was the result of a typical football play.  It was just a freak accident."

Cutinella's death is the third death of a high school football player due to football-related injuries in a week.  Demario Harris Jr. of Troy, Alabama died Friday after being tackled. That same day, Isaiah Langston of Rolesville High School collapsed and died during pre-game warm-ups.

That certainly makes for an eye-catching headline. But let's look at the overall numbers behind school football deaths.

In a 2013 study, The American Journal of Sports Medicine found football-related fatalities in high school and college average 12.2 per year.  That is about 1 in every 100,000 participants. Fatalities are most commonly from indirect causes, such as heat illness and cardiac failure. College football players are also 2.8 times more likely to suffer fatal injury than high schoolers.

And the popularity of college football may be an issue here. The New York Times paraphrases Kate Carr, president and chief executive of Safe Kids Worldwide, as saying that "some of the intense culture of professional and collegiate football is trickling down to the high school level."

Some school districts have instituted stricter practice and equipment guidelines in response to evidence that deaths have increased since 1994.

According to a study in the International Journal of Biometeorology, deaths from heat-related injuries nearly tripled from 1994 to 2009. Researchers said some of the increase may be explained by higher temperatures during practice times and an increase in average BMI among football players, though those are only a couple of possible factors.

Students and teammates held a candlelight vigil for Cutinella on the school's football field Thursday.  Cutinella's grandfather told The New York Times that even though there are risks associated with football, he would never ask his grandsons to quit playing.