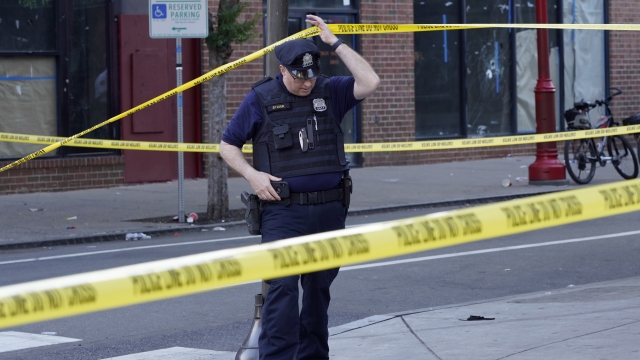 Gunfire killed three people and wounded at least 11 others in one of downtown Philadelphia's most popular entertainment districts late Saturday night, authorities said.

Police officers were patrolling the area on South Street in downtown Philadelphia when they heard multiple gunshots and witnessed several suspects firing into a large crowd just before midnight, Police Inspector D. F. Pace said during a news conference.

An officer shot at one of the suspects from about 30 feet away, but it is unclear if the suspect was hit, Pace said.

"You can imagine there were hundreds of individuals just enjoying South Street, as they do every single weekend, when this shooting broke out," Pace said.

Two men and a woman were among those killed in the shooting, he said. Their names were not made public by authorities. The conditions of those who were wounded by gunfire remains unknown.

Two handguns were recovered, including one with an extended magazine, police said. No arrests have been made.

The department said on Twitter to avoid the area. South Street is known for its entertainment venues and night life with multiple bars, restaurants and businesses