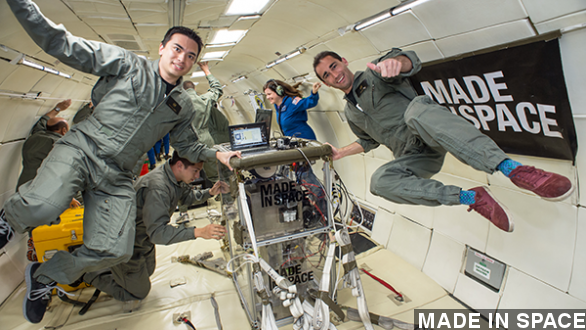 Toolmaking has been a defining characteristic in human evolution. And now we're bringing the practice to space.

A SpaceX cargo ship launched toward the International Space Station overnight was carrying a 3-D Printer in its cargo marking the first time that technology has left the earth's atmosphere. (Video via NASA)

California-based company Made In Space was contracted by NASA to manufacture the 3-D printer capable of functioning in zero gravity. And it isn't just for show.

In a press release, CEO Aaron Kemmer said the technology "will fundamentally change how the supply and development of space missions is looked at."

That's because at the moment, tools and replacement parts needed in space must be manufactured here on earth and then delivered by rocket. (Video via NASA).

The capability to build those parts on the spot with a 3-D printer would only require the blueprints to be transmitted, essentially by email. And the printer launched Sunday is a step in that direction.

Its task is to build sample parts that will be returned to earth and subjected to quality tests. But as CBS reports, building reliable items from plastic is only the current goal.

SUMI DAS FOR CBS: "The next challenge is to print objects using materials found in space. Regolith...that covers the moon could hold the key."

MICHAEL SNYDER VIA CBS: "Imagine you could just go up to the moon and build your habitat."

And while inhabiting other planets still seems a distant aspiration, manufacturing will allow us to live long and prosper once we get there.