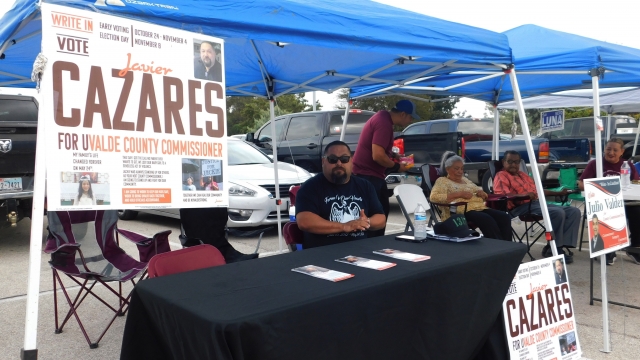 SMS
3 Candidates Vie To Take Over Uvalde County Commission Seat
By Axel Turcios
By Axel Turcios
November 8, 2022
Three write-in candidates want to take a seat from Mariano Pargas, who was the acting police chief at the time of the Robb Elementary shooting.

Uvalde, Texas is in the national spotlight once again, as voters make their way to the polls on Election Day.

"I want to do anything to support the community," said voter Richard Rodriguez. "I'll be supporting the candidate that just does that."

"If I did not want to see change, I would not be here, so that is the way I'm doing my part," said voter Rhanda Shelton.

Three political novices are are vying for a seat on the Uvalde County Commission: retiree Diana Olvedo-Karau, business owner Julio Valdez, and Javier Cazares, the father of Jackie Cazares, who was killed in the mass shooting at Robb Elementary just over five months ago.

"Their voices need to be heard, just to open their eyes again to vote," Cazares said. "I was that person that my vote doesn't count, but it does. With the help of everybody, we can make things happen, and I'm hoping everyone will come out and vote."

"My primary reason for filing to run for this race was the failure of May 24," Olvedo-Karau said. "Specifically for this seat, Mariano Pargas is the current incumbent, and he needs to step down, which he hasn't. He was the only person on the ballot, and someone needed to challenge him, and I was one of those people." 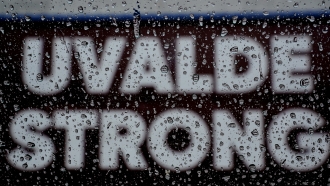 The candidates are running against Mariano Pargas, who was the acting Uvalde police chief during the mass shooting. He was suspended after a state report found failures in the police response to the shooting.

None of the three candidates have political experience, but they say they're energized and eager to see changes in Uvalde.

"We don't want other families to feel how we do; that's the main thing," Cazares said. "It's unbearable, losing a child the way our children were taken away. All we can do is hope that people come out there and vote."

"Obviously, May 24 was a complete disaster, and part of that is because nobody had a plan," Olvedo-Karau said. "There wasn't a common focus on how do we respond to crisis, and it fell apart. We lost 19 children and two teachers. Unforgivable."

NEWSY'S AXEL TURCIOS: What was your stance before the shooting on guns, and what is it right now?

VOTER RHANDA SHELTON: I did not see a problem with this until this happened, to be honest. Now I'm going to go vote and see if I can make a change.