Ebola Has Killed A 2nd Person In Goma, Congo 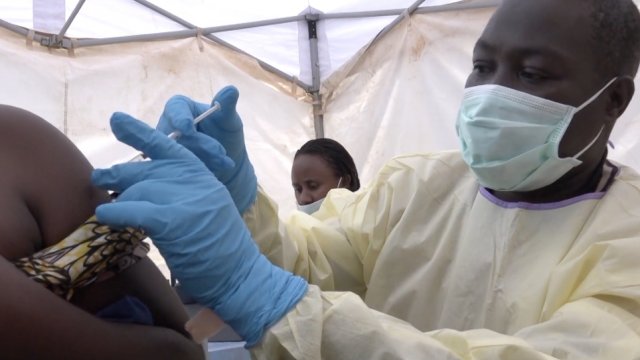 On Wednesday, a second person died in Goma, Congo, after contracting Ebola. According to a treatment center and Médecins Sans Frontières, the man died 26 hours after being admitted.

The treatment center said, "This patient illustrates one of the main challenges of the Ebola response: the early detection and admission of Ebola cases."

Goma is home to nearly 1 million people. It's a major transit hub on the Democratic Republic of Congo's border with Rwanda. It's a heavily traveled area, which is why the World Health Organization has feared Ebola reaching the city and spreading.

The outbreak spread to Goma when a missionary came into the city after visiting a town called Butembo, which has been devastated by the virus. The pastor was diagnosed with Ebola while in Goma and died. The day after his death, July 17, the WHO declared the outbreak a health emergency of international concern. It's only the fifth declaration of a global health emergency in history.

WHO officials clarified that there's no indication the pastor and the person who died Wednesday are linked.

On Tuesday, the head of the WHO Ebola Response Team said the second victim's home and the health center he passed through were being disinfected. He also said officials have established a list of "high-risk contacts" and that those people would be vaccinated.

Health centers in Goma have been provided with training and equipment to improve infection prevention and control, according to the WHO. More than 5,000 health workers have been vaccinated already, and there has been reinforcement on screenings and monitoring at border crossings and the airport.

The WHO's director general, Tedros Adhanom Ghebreyesus, said, "This is an event we have anticipated. This is why we have been doing intensive preparedness work in Goma: so that any new case is identified and responded to immediately."

He and other U.N. agency heads issued a joint statement on Wednesday reflecting on the "relentless and devastating" disease almost a year to the day after Congo declared an outbreak on Aug. 1, 2018.

There have been more than 2,600 confirmed cases of the virus, although an experimental Ebola vaccine seems to be effective. More than 1,800 people have died. This outbreak is the second-deadliest in history, coming on the heels of the 2014 outbreak in West Africa that claimed more than 11,000 lives.

The WHO says the risk of regional spread remains "very high," so neighboring Rwanda, Uganda and South Sudan began vaccinating health workers weeks or even months ago.