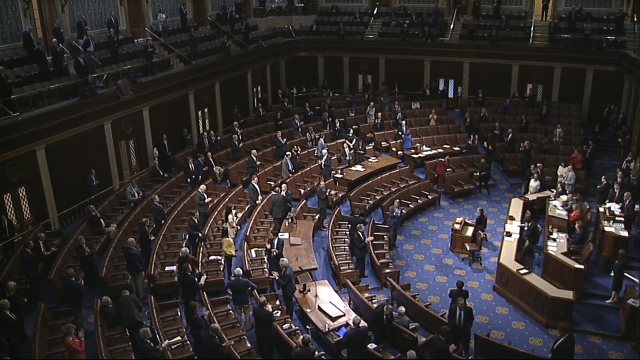 SMS
No Consensus On 2nd Stimulus Package As Congress Prepares To Return
By Nathaniel Reed
By Nathaniel Reed
July 17, 2020
Congress is widely expected to pass another coronavirus stimulus bill next week, but what it will include is still anyone's guess.
SHOW TRANSCRIPT

A second stimulus package is coming, but what it will look like is anyone’s guess.

Democrats in Congress have been urging Senate Republicans for months to take up the HEROES Act, which would provide billions in aid to states and continue the $600-a-week federal supplement to unemployment benefits.

"We urge the president and the GOP Senate to get on it and help the American people, help our state and local governments by honoring our heroes,” House Speaker Nancy Pelosi told reporters Thursday.

GOP leadership has signaled that the next round of government stimulus must give companies increased liability protections, preventing businesses from being sued over COVID-19 exposure if they are adequately following public health guidelines.

A new economic stimulus package could also provide certain business with another round of Paycheck Protection Program loans, which Treasury Secretary Steven Mnuchin advocated for on Friday while testifying before the House Committee on Small Business.

"A next phase of relief should extend the [Paycheck Protection Program], but on a more targeted basis for smaller companies and those that are especially hard-hit, such as restaurants, hotels and other travel and hospitality business," Mnuchin told the committee.

Further down Pennsylvania Avenue, President Trump has repeatedly signaled he'd like a payroll tax cut in any upcoming bill, though it has little support among Senate Republicans.

Economists say any payroll tax cut would mostly benefit employed Americans, not those who are furloughed or still seeking work.