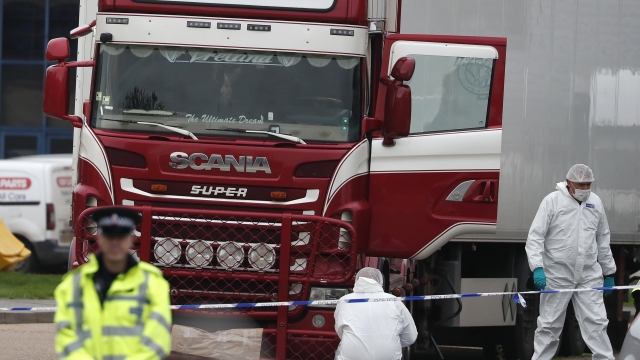 SMS
France And Belgium Arrest 26 People In Connection With Truck Deaths
By Johannah Grenaway
By Johannah Grenaway
May 27, 2020
The suspects were arrested after allegedly taking part in the human trafficking and deaths of 39 Vietnamese migrants found in the back of a truck.
SHOW TRANSCRIPT

Authorities in France and Belgium have arrested 26 people in connection with the deaths of dozens of Vietnamese migrants.

In October, 39 bodies were found in the back of a freight truck in the U.K.

An international investigation team including Belgium, France, the U.K. and Ireland was coordinated by the European Union crime agency Eurojust.

During early morning raids on Tuesday, 13 suspects were arrested in France for allegedly housing and transporting several dozen migrants from Asia every day for several months. Another 13 were arrested in Belgium — 11 Vietnamese citizens and two Moroccan citizens. Several have been charged with migrant smuggling with aggravating circumstances, belonging to a criminal organization, and forgery.

If convicted, the suspects face up to 15 years in prison and a fine of up to $162,000 per identified victim.

Additional Reporting by Samuel Petrequin of The Associated Press.