25 Years After Waco Siege, A Look At Branch Davidians' Rise And Fall 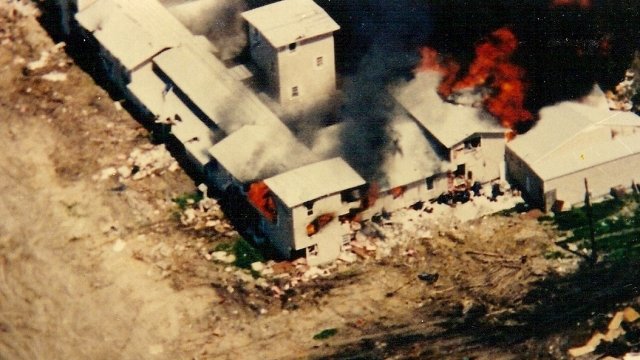 The group's roots can be traced back to the 1930s.

The Branch Davidians became notorious in the 1990s, transfixing the world and starting a national conversation about cults and federal oversight. But the Davidians' roots actually can be traced to the 1930s.

He and his followers settled near Waco, Texas, in 1935. Houteff died in 1955, and his wife took over. She predicted April 22, 1959, would mark the dawn of a new messianic age. Hundreds gathered, nothing happened. So then factions splintered off. One was those factions was the Branch Davidians.

Control of that group changed hands until 1987, when a man named Vernon Howell stepped into breach. Howell took the name David Koresh and fancied himself an end-time prophet.

Koresh had extensive knowledge of the Bible. He believed he could speak directly to God.

Its fight for tax exemption was dubbed "Operation Snow White," and it became a major operation of domestic espionage.

The FBI says he also had sex with multiple "spiritual" wives, including girls as young as 10 — again, saying it was all part of God's will, as the believers prepared for Armageddon.

Their prep work set them up for a run-in with the feds.

The ATF came to suspect the group was hoarding weapons illegally, including semi-automatic rifles, assault rifles, shotguns, revolvers, pistols and hundreds of grenades. And that's what triggered a confrontation with agents and 51-day standoff that ended in fire watched around the world.

Here are key moments in the Waco siege. Sunday, Feb. 18, 1993: ATF agents attempt to execute arrest and search warrants at the compound. A two-hour gunfight ensues. Four ATF agents are killed, 16 more wounded. An undetermined number of Davidians are killed and injured. Within a few hours, the FBI becomes the lead agency for resolving the standoff.

Tuesday, March 2-April 18: Koresh has 117 conversations with the FBI  that go basically nowhere.

April 19: The FBI moves armored vehicles closer to the compound and launches tear gas inside. A fire erupts and the bodies of some 80 Davidians, including 17 children and Koresh, are later found in the ashes. Many of the dead have fatal gunshot wounds to the head, chest and face. Koresh has a gunshot wound in the middle of his forehead.

Davidians are believed to have started the blaze, but it was also later disclosed that agents had used pyrotechnic tear gas rounds, which critics insist could've sparked the fire.

Some survivors of the raid were tried, found not guilty of the ATF murders. But they got prison time for their actions during and after the raid. The remaining survivors reorganized. They published the writings of Koresh, and began the process of rebuilding the movement.

Attorney General Janet Reno later expressed regret for approving the raid, but investigators maintain to this day, the government acted within the law.