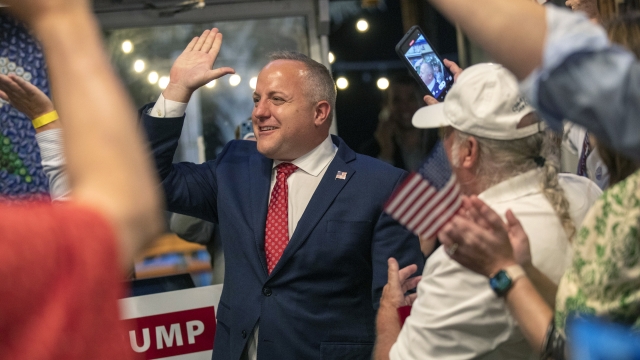 Former President Donald Trump notched a significant victory in South Carolina, where his preferred candidate easily ousted five-term Rep. Tom Rice, the first Republican to be booted from office after voting to impeach the former president last year. But another high-profile GOP target of Trump in the state, Rep. Nancy Mace, managed to hold back a challenger.

Meanwhile, in Nevada on Tuesday, Trump's pick, Adam Laxalt, won his U.S. Senate primary, defeating a populist candidate who is arguably more representative of the Trump base.

Takeaways from the latest round of primary elections:

Rice and Mace have been objects of Trump’s anger ever since a mob of his supporters stormed the U.S. Capitol to stop the certification of President Joe Biden's election win.

Their transgressions? Mace stated on national TV that Trump’s “entire legacy was wiped out” by the attack, while Rice became an apostate for joining a small group of Republicans who voted with Democrats in favor of Trump’s second impeachment.

“He threw a temper tantrum that culminated with the sacking of the United States Capitol,” Rice told NBC News on Monday. “It’s a direct attack on the Constitution, and he should be held accountable.”

Voters ultimately rendered different judgments on the duo, reflecting a split within the GOP about how to move forward from the Trump era. Rice's largely rural district is representative of Trump's America, where crossing the former president carries a steep cost. Even as Trump railed against both lawmakers, he chose to hold a rally in Rice's district earlier this year.

That's because Mace's district, which centers on Charleston, is full of the type of moderate suburban voters who fled the GOP under Trump. It is one of the few districts in an overall red state where Democrats have been even moderately competitive in congressional races.

The results demonstrate that the Trump factor can't be underestimated in solidly Republican territory, a potential warning sign for other Republicans, including Rep. Liz Cheney of Wyoming, who also voted to impeach Trump and has helped lead the House panel investigating the Jan. 6 attack. She's facing a competitive primary in August from a Trump-backed challenger.

The two Republican leaders haven't been on speaking terms since December 2020, when McConnell acknowledged that President Biden defeated Trump. But they both endorsed Laxalt, who defeated retired Army Capt. Sam Brown, a West Point graduate and Purple Heart recipient who ran an unexpectedly strong campaign as a conservative outsider.

The mutual support, which brought together the Trump and establishment wings of the party, demonstrates the intense focus Republicans have placed on flipping the seat held by first-term Democratic Sen. Catherine Cortez Masto, who is considered among the most vulnerable senators.

A once solidly Democratic district in South Texas will now be represented by a Republican after Mayra Flores won a special primary election to finish the term of former Democratic Rep. Filemon Vela, who resigned this year to become a lobbyist.

Flores, a GOP organizer who is the daughter of migrant workers, will only hold the seat for several months before the district is redrawn to be more favorable to Democrats. But her victory in the heavily Hispanic Rio Grande Valley is an ominous sign for Democrats.

They are not only losing ground in a region they long dominated, but Flores' success as a candidate also demonstrates that Republicans are making inroads with Hispanic voters.

Her win also has implications for Democrats' ambitions in Congress, denying House Speaker Nancy Pelosi an opportunity to add to her slim two-vote margin to pass legislation.

Governor's races are often overlooked. But the general election contest in Maine is among a handful of governor's races that are likely to be competitive this year, along with Georgia, Pennsylvania, Michigan, Wisconsin and Arizona.

Tuesday's gubernatorial primaries were a mere formality, since the races were uncontested. But they locked in what promises to be a doozy of a general election between two longtime foes.

Democratic incumbent Janet Mills is seeking a second term. She’s a former district attorney, state lawmaker and Maine attorney general who frequently clashed with Republican Paul LePage when he was governor. Now LePage, who has described himself as “Trump before there was Trump,” is challenging her.

The contest will test the appeal of Trumpian candidates in New England. The Democratic Governors Association has already booked $5 million in TV ad time.