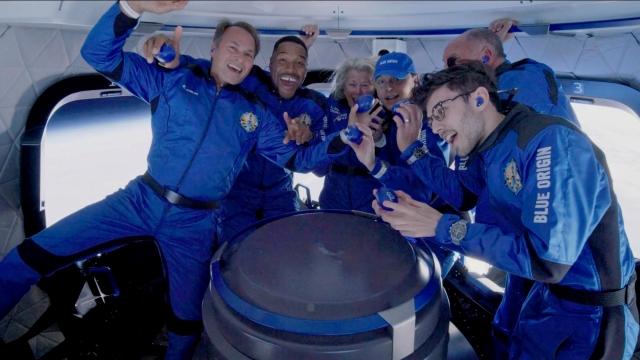 This was the year of the space tourist — both human and robot — starting on Mars in February when the Perseverance rover mission finished its 293 million-mile trek.

The craft brought along a hitchhiker, a solar-powered drone that quickly earned a place in the record books.

In July, there was an emergency aboard the International Space Station when a new Russian laboratory module unexpectedly fired its thrusters, sending the station backflipping out of control.

As for humans, 2021 was the year for billionaires in space. Virgin Galactic founder Richard Branson was first, launching in July.  A few days later, Amazon founder Jeff Bezos went up on one of his Blue Origin rockets.

In October, space went Hollywood. Captain Kirk himself, 90-year-old William Shatner, became the oldest person in space. He launched on a Blue Origin flight, going where no actor had gone before.

"What you have given me is the most profound experience I can imagine," he said. "I'm so filled with emotion about what just happened."

Not long after, another actor went to the international space station for a 12-day stay.

The United States Space Force celebrated its second birthday with 6,500 guardians strong. The Force says it's needed to counter space threats from Russia and China.

At one point this year, there were a record-breaking 19 people in space at the same time.

Laura Shepard Churchley was one of them, riding to space on a Blue Origin rocket with five others including ABC anchor Michael Strahan. Churchley's father, Alan Shepard, was the first American in space nearly sixty years ago.

"Takeoff was wonderful," she said. "It reminded me of when I would go for a ride with daddy in his corvette and we'd hit a straightaway and he would just floor it."

Now she hangs their flight suits together. Her dad once famously hit a golf ball on the moon, so she packed a golf club.

The year in space wrapped up with the Christmas day launch of the most expensive and powerful space telescope ever.

Twenty-five years and $10 billion in the making, the James Webb Space Telescope will look back in time for clues about some of the earliest galaxies, stars and black holes.

Next year promises much more space exploration, with governments and private companies hoping to reach orbit. NASA and Space-X are planning launches of massive rockets that will pave the way to returning astronauts to the moon in 2025.