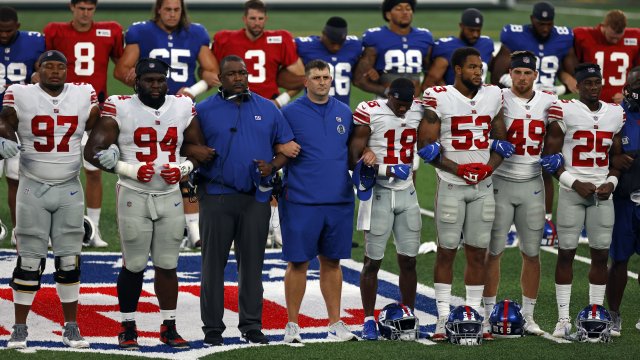 SMS
Social Justice On Minds Of NFL Players As Season Kicks Off
By Austin Kim
By Austin Kim
September 10, 2020
As the NFL season kicks off, the league and its players are balancing the pandemic with efforts to address racial inequality in the U.S.
SHOW TRANSCRIPT

Lauren Magarino: "The NFL is set to kick off its season, but headlining the league storylines this year are the pandemic and the players pushing for social change.

"Newsy's Austin Kim joins me to talk about the start of the NFL season. Austin, a lot of attention on the league when it comes to protests against racial injustice. What is the NFL planning this year?"

Austin Kim: "You know, if you talk to some of the players, Lauren, they say social justice and discussion around the racial inequality in the U.S.—  that's just as much of a story line as the pandemic. Now there's lots of attention about how the league handled Colin Kaepernick's protest back in 2017 but right now the league is promoting causes for social justice and equality. They're also including campaigns such as voting registration.

"The tone around the league has changed when it comes to this. NFL commissioner Roger Goodell said earlier this summer, explicitly, Black lives matter, in a video statement. Dallas Cowboys owner Jerry Jones has appeared to back off his team's anthem standing requirement."

Michael-Shawn Dugar, Seattle Seahawks beat writer for the Athletic: "It's not only the incidents of the police brutality that happened to Black people and you have predominantly Black leagues. It's an incident of police brutality that happened to people in your leagues while they're active players. Michael Bennett had a gun drawn to his head by Las Vegas police in 2017. Sterling Braun of the Milwaukee Bucks was brutalized by police. There's been these instances, and it's just like, 'Well, okay, you care because it happen to George Floyd. Well. Okay. Where were you when it happened to your own your own players?'

"For all players — mostly the Black ones — they just want the message to not get distorted. Make it very clear. Like we want to be heard — hear us and know that these things are real and realize that what we have to deal with when we take this uniform off."

Kim: "How did they make sure that the message is getting clear despite everyone just having a different mentality during this pandemic?"

Dugar: "Right. So I think while some people want to like, 'Hey, man, I'm on the pandemic. I can't really worry about this.' It's like, 'No, man, if you're worried about just humanity — the humanity of Black people that you were sitting here to watch perform for you — you care about every aspect of it that it's in: medicine or education, the justice system. Whatever it is, we get hit the hardest in all of it, right? So if you're going to care about your favorite team, advancing in the bubble, well, care about what those guys have to go through when they step off that court."