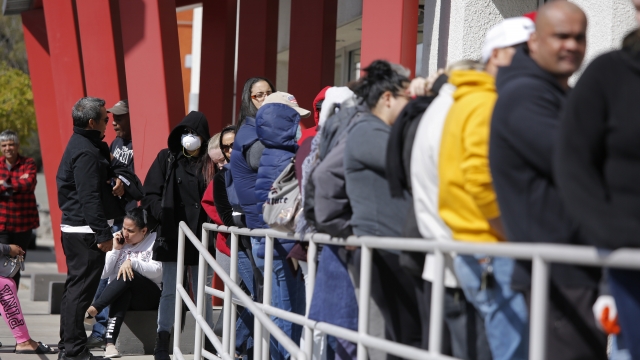 The U.S. economy is in a vastly different state than a year ago, following a series of financial shock waves.

The U.S. economy is ending 2020 much differently than it began.

"As we begin the new year, our economy is booming, wages are soaring, workers are thriving, and America's future has never ever looked brighter, never," President Donald Trump said.

January had record-breaking job growth, unemployment dropping to 3.5 percent in February. The markets were promising — until the COVID-19 pandemic hit, decimating our health and economy practically overnight. A plunging stock market on March 9, the worst point loss since 1987, was the first of several shock waves. President Trump insisted the downturn would be quick.

"The hardship will end; it will end soon. Normal life will return. And our economy will rebound very, very strongly," President Trump said.

Just days later, Congress passed a $2 trillion relief package. It helped, but only for a short time.

"Everyone, all of us that are lucky enough to have a retirement account, has seen it go down," Alicia Munnell, director of the Center for Retirement Research at Boston College, said.

In a five-week span, more than 26 million Americans filed for unemployment. That's more than all the jobs that had been added since the Great Recession.

President Trump and some states, like Florida, focused on ending COVID restrictions. Other countries, trying the same strategy, abandoned those plans as cases surged. And now we end the year with record-setting daily deaths and hospitalizations. Still, with vaccines rolling out, officials are projecting a rebound.

"My expectation, and many people have the expectation that the second half of the next year, the economy should perform strongly. We should be getting people back to work. Businesses should be reopening and that kind of thing," Federal Reserve Chair Jerome Powell said.

Overall, the economy remains in a vastly different state than a year ago.

National unemployment is sitting at 6.7 percent as of November, and weekly jobless claims are on the rise again. And 12 million Americans are behind on their rent. Millions more are behind on their mortgage payments. A staggering number of restaurants closed this year: 110,000, according to the National Restaurant Association.

Even amid the misery, there have been some positive developments.

Americans have paid down their credit card balances — about $82 billion worth from March to May alone. New business applications are breaking records as well, as entrepreneurs fight for a piece of action in the economy's rebuilding. Both hopeful signs that 2021 could be a year of rebound, as long as the virus comes under control.