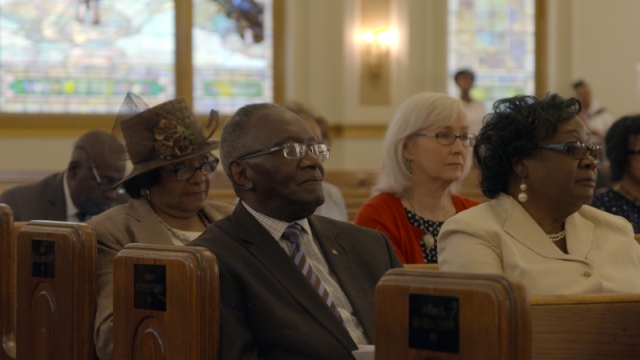 Every Sunday members of the Allen Temple AME Church come to hear the word of God and sometimes they get a side serving of politics with a biblical perspective.

"What is Easter for the undeserved, underrepresented and under appreciated in these times of 45," said Reverend James Speed during a Sunday sermon.

Noticeable is the lack of young people in the pews. It's a trend being seen among most religions across the country.  But the decline in youth participation in black America's oldest 'social network' has a particularly distinct impact on politics. Specifically how younger black Americans view elections and how campaigns court them.

Reverend James Speed has preached at Allen Temple AME Church in Greenville, South Carolina for the past 11 years. He says he doesn't tell his members how to vote, but rather to participate in the electoral process.

That sense of community  is why politicians for decades have been coming to churches like this to court likely voters. Allen Temple and the community center next door have already hosted a handful of presidential candidates this year in a state where a majority of democratic primary voters are black. But candidates are realizing these efforts alone risk only furthering the generational divide between young and older black voters.

Overall, younger African Americans are less likely to be affiliated with black churches and are also not as religious compared to older generations. A trend that seems to be growing.

"We're less religious than our parents and we're less religious than our grandparents. We embrace more of our spirituality rather if you will more so than organized religion," said Jalen Elrod who serves as the 1st vice chair of the Greenville County Democratic Party. "I would say from reconstruction up until probably now the black church has been at the center of black life social, political [and] economic. And I think you see a shift that is going to play a role in the 2020 election and definitely elections in years to come."

Experts say the reasons young black people are shying away from the church are varied, but civic groups, fraternal organizations and political movements like Black Lives Matter are some of the outlets they gravitate towards in the absence of activism through the church.

Presidential candidates like Senator Cory Booker have picked up on this change. Booker says his campaign works with churches and he's also ramping up outreach efforts to attract younger voters.

"Well, it's not either or, it's and both. And so I grew up in the church, God is the center of my life and I'm going to continue to use church and religious institutions as a way to talk to people and connect with people, communicate with people about my ideas and my spirit and I think that's a tradition that we're going to keep," Booker said during a campaign stop in South Carolina. "But also [with] young voters, you have to master social media [and] you have to talk on the radio stations that they listen to and really honor them and see them for who they are. The strength of our communities [and] the future of our communities."

Appearances on radio shows like The Breakfast Club and a push to hire a diverse staff are some of the ways other candidates are appealing to this core group of voters.

Party leaders in the state also expect presidential hopefuls to reach out to black Greek organizations and heavily campaign on the campuses of historically black colleges.

"You have to go to the barbershops [and] into the beauty salons and into the nightclubs even," Elrod added.  "To the community centers to the malls [and] to the concert[s]. You had to go where the young folks are because for good for ill it's not the church anymore."

And even though young people may not be as active as they once were in the church, Reverend Speed is still hoping to tap into their passion by engaging them. Building on past traditions that elevated the concerns of African Americans on a national scale.

"It's incumbent [for] us as a church and for the younger generation to find a way to come together," Speed said. "We need each other. The young folk have the energy they have the strength. We have the wisdom and you put the strength, [energy] and wisdom together. We can do great things."