2020 Census: What's Wrong With Asking People If They're Citizens? 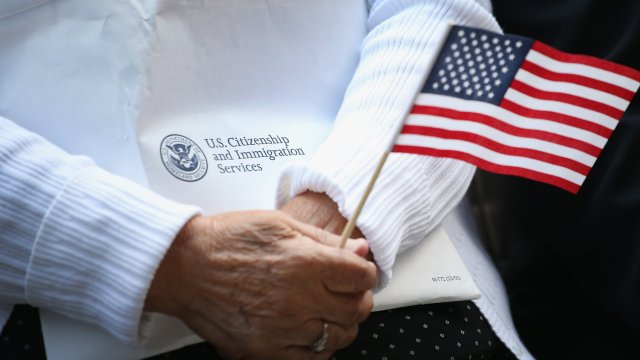 Critics say that question might scare immigrants away from responding to the census, which could mean big changes to states' representation.

The Trump administration's plan to add a citizenship question to the 2020 census has been making headlines for almost a year.

"Democrats are accusing the Trump administration of hijacking the 2020 census."

"A federal judge blocked the Trump administration's plan to add a citizenship question."

"We've got breaking news from the Supreme Court, which was just announced. It will take up a major case about declaring citizenship on the census."

We won't blame you if you're not sure why the case is so contentious. Debating the merit of a single question on a census might seem a bit trivial.

But the controversy actually touches on the very basis of our democracy.

So getting the census right is crucial — especially since it also affects how much funding your state receives from various federal programs.

Now, what's wrong with asking people if they're citizens?

Political scientist Victoria DeFrancesco Soto told MSNBC: "The more burdensome you make a survey, whether you make it longer or whether you ask sensitive questions, that makes people less likely to answer."

Critics say that question might scare immigrants, documented or undocumented, away from responding the census — even though the Census Bureau cannot release any identifying info it collects.

And remember: undercounting immigrant populations could lead states with a lot of immigrants — like New York and California — to lose congressional seats.

But in the eyes of some conservatives, the fact that these states receive more congressional representation as a result of their undocumented populations is unfair to begin with.

Kris Kobach on Fox News: "If you're illegally in this country, we shouldn't consider you a resident anyway because you could go home at any day, you could be deported. So why should we be worried about counting you?"

For what it's worth, the legal consensus has long been that the Constitution requires the census to count every U.S. resident, documented or not.

A recent Census Bureau survey found the citizenship question "may be a major barrier" to getting an accurate population count. Strikingly, more than half of the survey's respondents incorrectly believed the 2020 census will be used to locate undocumented immigrants.

But the Trump administration says it found no "empirical, definitive" proof the question will lower response rates.

The question's supporters also point out that many other countries, including Australia and the U.K., already ask the same question.

British political adviser Steve Hilton said on Fox News: "Surely it's reasonable to ask people if they are citizens."

The last time every household was asked the citizenship question was 1950. As for 2020, the Supreme Court is expected to rule on the legality of the question by the end of June.