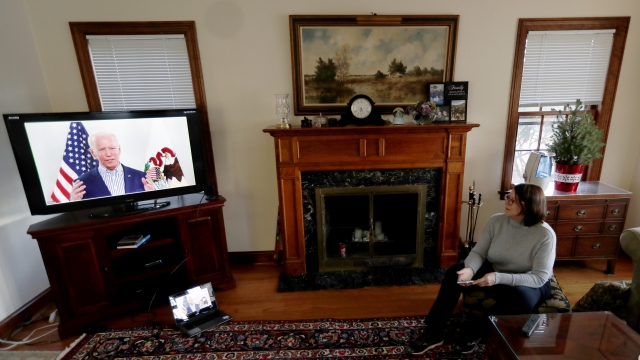 SMS
In The Wake Of The Coronavirus, Candidates Take Their Campaigns Online
By Amy Morona
By Amy Morona
March 20, 2020
As Americans navigate the impact of the coronavirus, presidential candidates are shifting their campaign efforts from the trail to computer screens.
SHOW TRANSCRIPT

“Tonight, in keeping with the latest guidance from the CDC to avoid gatherings of more than 10 people, I’m speaking to you from my home in Wilmington, Delaware,” former Vice President Joe Biden said in an address streamed online  March 17.

As Americans navigate the impact of the coronavirus, presidential candidates are shifting their campaign efforts from the trail to computer screens. Democratic frontrunner Biden and rival Bernie Sanders have each hosted multiple events online this month. And while President Donald Trump has yet to host a similar internet rally, his campaign website lists several supporter events being turned into “virtual seminars.”

It’s a change from the diner stops or rallies that traditionally have lined the pages of retail campaigning playbooks. One clear advantage? Reach. The Sanders campaign, digitally savvy but facing an almost insurmountable gap in the delegate race, reported three recent digital events earned more than 5 million combined views. A recent Biden video had more than 300,000 views. But with those types of numbers, UCLA associate professor and chair of the communications studies department Tim Groeling points out that comment sections of these events can be brutal, especially in a campaign cycle that’s already dealt with trolling.

“Honestly, I think it’s going to be very difficult to make people voluntarily tune in to these things and participate in them," he said. "I think the people who are showing up are true believers who are already motivated or the true haters who are trying to sabotage it.”

Groeling suspects campaigns will try to manage these sections more closely and might even turn off live chat functions in future events.That could be helpful to avoid criticism if and when glitches happen, as was the case during one of Biden’s early events.

There may be some flexibility for fumbles right now, according to The University of Connecticut’s John Murphy. Part of his work includes studying the intersection of politics, social media and human behavior. But any flexibility voters have won't last long, especially with young voters — digital natives who are already used to consuming savvy content.

“They’re going to expect some polish, because they’re thinking, ‘You’re going to be leading me into this new world and you can’t even do a virtual town hall,’ so the bar will be higher for that group," he said. "I think people 40, 50, 60, 70, I think there’s a little wiggle room with them.“

But online-only events have some major drawbacks from traditional campaigning. Crowd sizes of in-person rallies have been a point of pride for President Trump. And his campaign has touted the voter information it has garnered from attendees.

No matter the candidate, there’s something to be said about people gathering together, according to UCLA's Groeling.

"When people are physically in the same place, we take cues, and it’s on a very core-emotional level," he said. "That is not captured well online, it really isn’t."