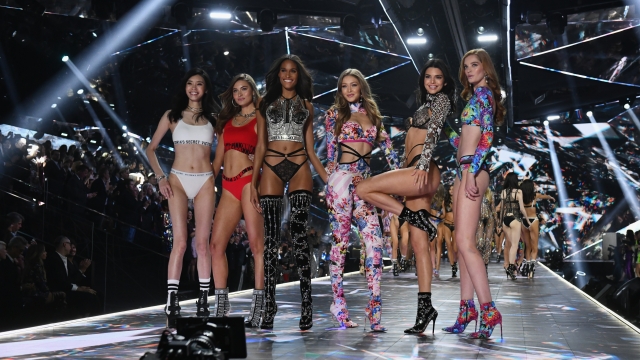 For more than 20 years, the Victoria's Secret Fashion Show has promised viewers an hour of wild costumes, winged supermodels and musical performances by huge stars. At its peak, it drew in more than 10 million people at a time of year when viewership is usually lackluster. But this year, there will be no "angels" walking the runway.

And the show's not without controversy; it's faced backlash for lacking diversity. The show's models are mostly tall, thin and white. Critics say the brand hasn't offered a good enough explanation of why that is.

In a 2018 interview with Vogue, Victoria's Secret's then-chief marketing officer Ed Razek made controversial comments about transgender women being represented in the show. When asked if the brand had seen a shift in its market's wants or needs, he responded:

"'Shouldn't you have transsexuals in the show?' No. No, I don't think we should. 'Well, why not?' Because the show is a fantasy. It's a 42-minute entertainment special. That's what it is. It is the only one of its kind in the world, and any other fashion brand in the world would take it in a minute, including the competitors that are carping at us."

Since that interview, several clothing and lingerie brands have dedicated themselves to diversity and inclusion. One of the best known is singer Rihanna's Savage X Fenty line.

The company's shows have cast models who have what many fans called more realistic body types. Its Fall 2019 show included models of several different races, plus-sized women, women with disabilities and transgender women.

Rihanna has said the purpose of the line is to make all women, no matter their size or their skin color, feel good about themselves. She said, "I'm not built like a Victoria's Secret girl, and I still feel very beautiful and confident in my lingerie."

She added, "All women enjoy being fun and sexy and flirty and feeling comfortable, and I wanted Savage X to be a place for them to feel safe in finding that. ... I wanted to approach lingerie in a new way. ... Most of all it's inclusivity. That's what I stand for."

Rihanna isn't alone. Other brands like "Aerie", the lingerie subsidiary of clothing brand American Eagle Outfitters, have campaigns like #AerieREAL, which casts women of all backgrounds and body types, and makes it a point to not photoshop their models. And, "ThirdLove" offers dozens of customizable options and sizes for its customers.

For now, the Victoria's Secret show seems to be canceled indefinitely as the company tries to "evolve the messaging" of its brand. Burgdoerfer said moving forward, Victoria's Secret "will be communicating to customers but nothing similar in magnitude to the fashion show."