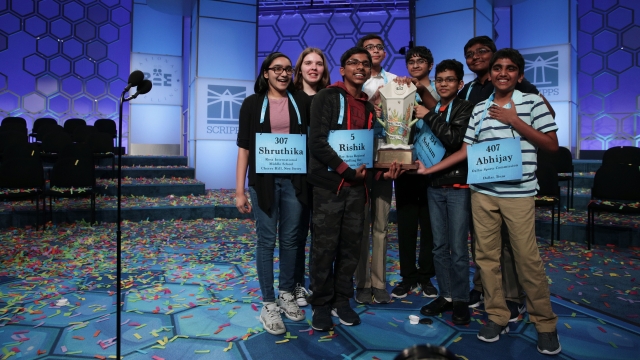 SMS
The Dictionary Proves To Be No Match For The 2019 Spelling Bee Champs
By Katherine Biek
By Katherine Biek
May 31, 2019
Spelling bee officials ultimately decided they had run out of words to challenge the final eight spellers with.
SHOW TRANSCRIPT

"Auslaut" was the winning word at the 2019 Scripps National Spelling Bee. Along with "erysipelas," "bougainvillea," "aiguillette," "pendeloque," "palama," "cernuous" and "odylic."

For the first time in the spelling bee's more than 90-year history, it crowned not one — but eight champions.

It's not as if Scripps officials didn't try to whittle the group of super-spellers down to just one. The problem was the dictionary couldn't keep up.

After a record-breaking 20 rounds that stretched into early Friday, all eight final spellers left in the competition were declared the winners because the spelling bee had run out of words to challenge them with.