This Year's Women's March Expected To Be Smaller Than Previous Years 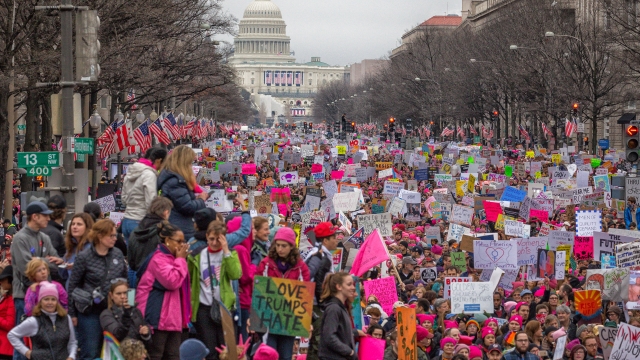 SMS
This Year's Women's March Expected To Be Smaller Than Previous Years
By Ahmed Jawadi
By Ahmed Jawadi
January 19, 2019
​One of the co-presidents of the event, has been facing scrutiny over her seeming refusal to condemn Nation of Islam leader Louis Farrakhan.
SHOW TRANSCRIPT

Demonstrators will hit the streets of cities across the globe Saturday for the third annual Women's March. But this year's event is expected to draw in fewer participants than prior years, in part, over allegations of anti-Semitism among the march's leadership.

The protest is intended to tackle a wide-range of issues, including violence against women and reproductive rights. But one of the leaders of the event — its co-president Tamika Mallory — has been facing scrutiny over her seeming refusal to condemn Nation of Islam leader Louis Farrakhan. Farrakhan has a history of making anti-semitic remarks and pushing anti-semitic rhetoric and conspiracies.

During an appearance on ABC's "The View" last week, Mallory said she doesn't "agree with many of Minister Farrakhan’s statements," but she didn't outright condemn him. Mallory has also been called out for anti-semitism by one of the group's original organizers. She told The New York Times that both Mallory and her co-president wanted to educate her on what The Times called the "dark side of Jewish history," and how Jewish people played a big part in the slave trade and the prison industry.

Several prominent groups and public figures have since pulled their support from the Women's March, including the Democratic National Committee, the Southern Poverty Law Center and Sen. Kamala Harris, who spoke at the March in 2017.

One Women's March official told The Hill that she expects "tens of thousands" to attend the event in D.C. For context, the first Women's March in 2017 — which is considered to be the largest single-day demonstration in recorded U.S. history — brought in hundreds of thousands of protesters just to the nation's capital alone.