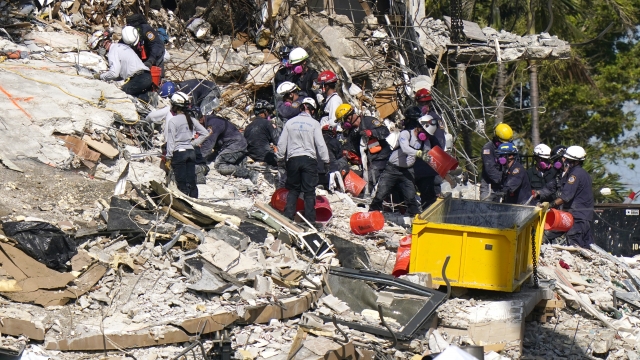 A massive, county-wide audit of every building older than 40 years is underway in Miami-Dade County.

This, as questions grow about why critical repairs weren’t made years ago before the catastrophic collapse of Champlain Towers South. A structural engineering consultant warned in 2018 of ‘major structural damage’ needing millions of dollars in repairs

Frank Morabito, of Morabito Consultants, noted  'failed waterproofing' in the entrance drive and pool deck was the 'main issue of the building structure.' The report said it was 'a major error' during construction. The concrete slab, too flat, to let water run-off and drain.

"It’s a major problem for a building so close to the shoreline. Add in rising sea levels and the fact that the building was sinking for at least 6 years, according to a study… the safety risks only worsen."

The mayor of Surfside saying over the weekend he doesn’t know if any repairs were made. Concrete is not waterproof -- in fact it’s porous. When the saltwater comes in contact with the steel it starts to corrode it.

“We would have a lot of salt water come through the bottom of the foundation. The cars would float, that’s how much water would be floating around in the parking lot.”

Experts who have watched this video of the collapse say it appears the lower level may have given way first.

According to the 2018 report, the parking garage, under the pool deck, showed signs of 'stress and fatigue,' with 'abundant' cracking and spalling in the concrete columns, beams and walls.

Spalling is when steel expands and concrete falls out. Reinforcing bars were also exposed. Morabito was even ‘convinced’ attempts to repair cracks were 'ineffective' saying there was 'evidence of poor workmanship from the previous contractor.'

Morabito said fixing these issues would be disruptive, and costly. The estimate to fix the garage, entrance and pool deck alone racking up to 3.8 million dollars.

The Associated Press reports owners were scheduled to make the first payment toward these and other costly but necessary repairs on July 1, leading some condo owners to take out loans.

The report pushed for repairs in 'a timely manner,' but according to a statement from Morabito Consultants the building association didn’t get back to the firm until June of 2020.

The statement also said “at the time of the collapse roof repairs were underway, but not concrete reconstruction.”

The roof was in satisfactory condition, with minor cracks, according to the report. Leaving experts, and the rest of the world watching, puzzled without answers.