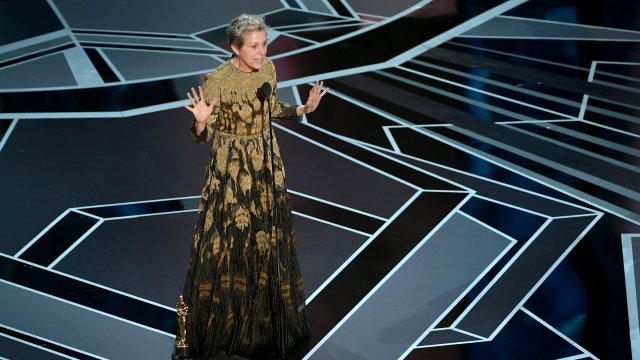 SMS
The 2018 Oscars Were Still Full Of #MeToo And Time's Up Moments
By Katherine Biek
By Katherine Biek
March 5, 2018
Producers said the ceremony would focus heavily on movies, but there were plenty of references to equality and representation.
SHOW TRANSCRIPT

Leading up to the 90th Academy Awards, producers said the ceremony would focus heavily on movies — not the Time's Up and #MeToo movements.

And unlike other awards shows this year, Oscar attendees did not use their fashion choices to show solidarity on the red carpet. But the movements were still very much felt throughout the 2018 Oscars.

In his opening monologue, host Jimmy Kimmel addressed Harvey Weinstein, the gender pay gap and sexual harassment in the workplace, saying, "We can't let bad behavior slide anymore. The world is watching us. We need to set an example."

Still, no moment was probably more talked about than Frances McDormand's rousing acceptance speech for best actress. Beyond championing her fellow female nominees, she also urged actors to boost diversity in Hollywood by adding inclusion riders to their contracts.