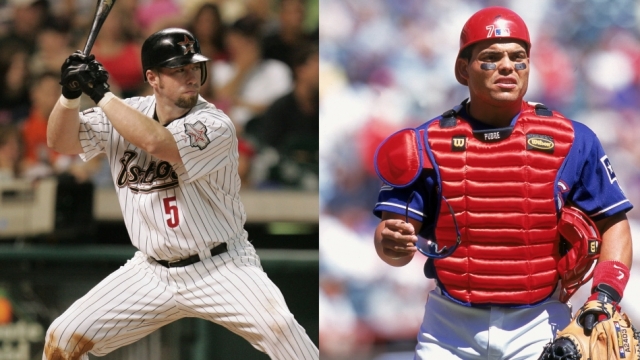 SMS
2017 Hall Of Fame Vote Shows Baseball Could Be Softening On Steroids
By Grant Suneson
By Grant Suneson
January 18, 2017
Two 2017 Baseball Hall of Fame inductees were accused of using steroids. Writers may be more accepting of those players.
SHOW TRANSCRIPT

The National Baseball Hall of Fame announced the three members of the class of 2017. It will induct: Tim Raines, who over a 23-year career established himself as one of the best leadoff hitters of all time.

And Iván Rodríguez, whose 13 Gold Gloves make him arguably the greatest defensive catcher ever. The man known as "Pudge" was overcome with emotion when he received his call to the hall in his first year of eligibility.

The class of 2017 could say a lot about how hall of fame voters will treat players who have been linked to performance enhancing drugs without actually testing positive.

Bagwell and Rodríguez had the statistics to make them surefire hall of famers, but lingering suspicions about their possible steroid use threatened to keep them out.

Jose Canseco said he injected Rodriguez with steroids in his tell all book. And rumors have been enough to threaten otherwise promising candidates for Cooperstown.

Roger Clemens and Barry Bonds were two of the most dominant players of their era. Neither was ever punished for steroid use, but investigations did heavily link them to PEDs.

For a while, it looked like those two would never get the 75 percent of votes required before their decade of eligibility ran out. But their numbers have been improving.

Bonds and Clemens saw their percentages of support fall to the mid-30s before rising above 50 in 2017.

It's impossible to know if enough baseball writers will forgive players who became synonymous with steroid use and let them into the hall. But this year's ballot shows there's still hope they'll get into the hall of fame.