After A Terrible Summer, The 2017 Box Office Still Set To Surpass $11B 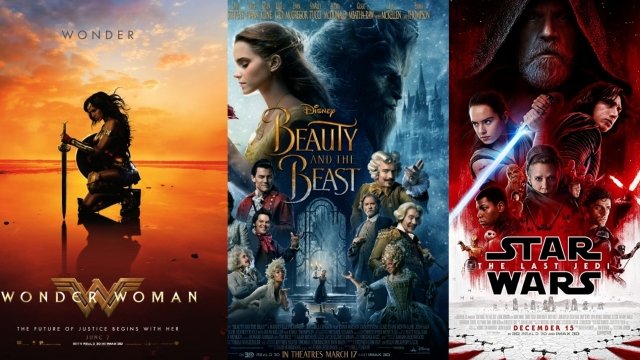 SMS
After A Terrible Summer, The 2017 Box Office Still Set To Surpass $11B
By Katherine Biek
By Katherine Biek
December 28, 2017
Experts predict moviegoers will have spent more than $11 billion in tickets at the 2017 domestic box office by the end of the year.
SHOW TRANSCRIPT

Well, it was a year filled with movies about creepy killer clowns, talking teacups and porgs. Oh, and superheroes. A heck of a lot of superheroes.

Experts are predicting that by the end of 2017, people will have spent just over $11 billion at the domestic box office to see films like "It," "Beauty and the Beast," "Star Wars: The Last Jedi" and more. That would make it the third highest-grossing year on record.

Now, this prediction comes as "Star Wars: The Last Jedi" is still pulling in big numbers at the box office. So far, it's made more than $423 million after being in theaters for only a little over two weeks.

Another Disney film, its live-action adaptation of "Beauty and the Beast," could still end the year on top of the charts, though. It's only the eighth movie ever to earn more than $500 million domestically.

What didn't help 2017's total numbers was a summer full of underperforming sequels and big-budget flops. Despite some hits — like "Wonder Woman" and "Guardians of the Galaxy Vol. 2" — this year's summer box office season was the worst Hollywood has witnessed in more than a decade.

But things started heating up again in the latter months thanks to big grosses from films like "It" and "Thor: Ragnarok."

Final box office figures are expected in early January. Still, if 2017 does end up surpassing $11 billion, it'll be only the third time Hollywood has made it past that domestic milestone.