20 Questions Study Brings Us A Step Closer To Mind Reading 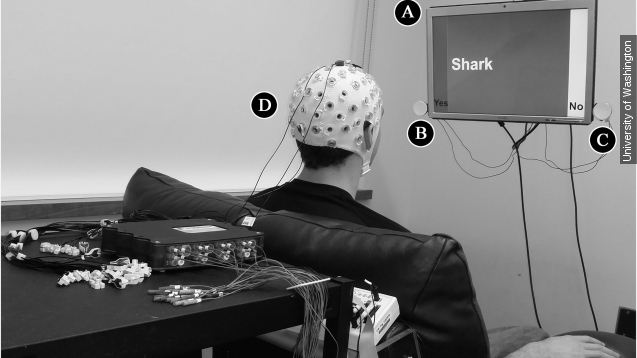 SMS
20 Questions Study Brings Us A Step Closer To Mind Reading
By Ryan Biek
By Ryan Biek
September 24, 2015
A new study in brain-to-brain communication placed participants a mile apart and asked them to play a game of 20 Questions with just their minds.
SHOW TRANSCRIPT

Out of all the superpowers in the book, one of the coolest would be reading people's minds. Well, psychologists are one step closer to that ability. (Video via 20th Century Fox Film Corporation / "X-Men: First Class")

A new study in brain-to-brain communication had participants a mile apart playing a game of 20 Questions — with just their minds.

In the University of Washington experiment, the "asker" was equipped with a magnetic coil positioned near the back of the head to stimulate activity in the part of the brain that processes visual information. The "answerer" — who sat a mile away — wore an EEG to record and transmit electrical impulses in the brain.

The asker physically selected questions on a computer screen. (Video via University of Washington)

These questions were transmitted to the answerer's monitor. Now here's where the brain-to-brain communication happened. Flashers representing "yes" and "no" below the screen were set at different frequencies, and the answerer's EEG machine recorded the frequency he or she focused on.

Then, that frequency was transferred back to the coil behind the asker's head. Only a "yes" frequency was strong enough to create a flash of light. But only the asker could see the flash since the signal was going directly to the occipital lobe.

The asker played the game knowing a "yes" meant a flash of light, and if nothing happened, that was a "no." The researchers reported askers correctly guessed the object in question 72 percent of the time.

The lead researcher called it the most complex human brain-to-brain experiment to date.

OK, that sounds a bit like mind control to us. (Video via Universal Pictures / "Lucy")

The researchers say they hope to be able to transfer knowledge between people one day. They'd also like to transfer brain states, like alertness to a sleepy person or focus to someone with ADHD.

The researchers published their most recent findings in the journal PLOS One.

This video includes images from istolethetv / CC BY 2.0.