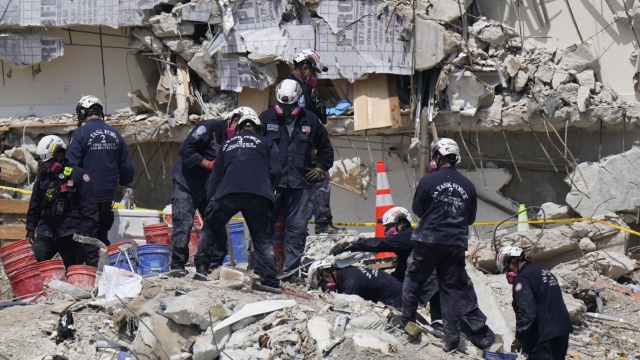 SMS
20 Dead, 128 Unaccounted For In Surfside Condo Collapse
By Newsy Staff
By Newsy Staff
July 2, 2021
Three children are among those dead with one of the victims being the 7-year-old daughter of a Miami firefighter.
SHOW TRANSCRIPT

Two additional bodies have been found in the rubble after part of a condo building collapsed in Surfside, Florida last week.

One of the victims was the 7-year-old daughter of a Miami firefighter.

"These men and women are paying an enormous human toll each and every day," Mayor Daniella Levine Cava said. "And I ask that all of you please keep all of them in your thoughts and prayers. They truly represent the very best in all of us and we need to be there for them as they are here for us."

We now know at least 20 people died in the collapse.

Officials say they have accounted for more people, so now 128 people are still considered missing.

Meanwhile, the area is preparing for potential impacts from Hurricane Elsa, starting as early as Sunday.