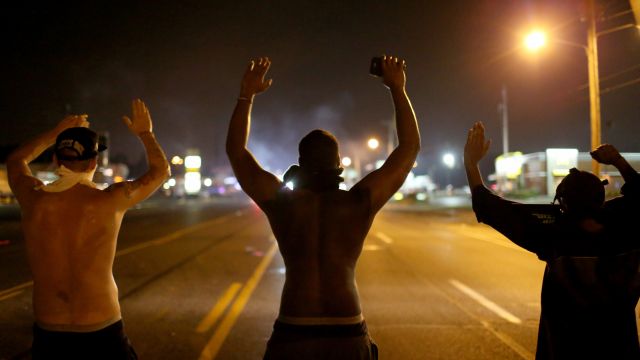 SMS
2 Years Later, Reform In Ferguson Remains A Daunting Task
By Jamal Andress
By Jamal Andress
June 8, 2016
Since the Ferguson Commission released its lengthy proposal to reform the city nearly nine months ago, progress has mostly been at a standstill.
SHOW TRANSCRIPT

"Starting out was very difficult. The first few meetings were very intense. ... I mean, it was so many raw emotions that had come out of all that had happened over the course of the past months," Ferguson Commission member Daniel Isom said.

Emotions largely tied to a healthy dose of skepticism about what the group charged with "fixing Ferguson" could actually get accomplished.

So what's been accomplished? Well, it's been 18 months since the commission formed, and nine months since it issued a laundry list of recommendations — but there's still a lot not happening.

As a follow-up to the unrest in Ferguson, Missouri, after Michael Brown's fatal shooting in 2014, Gov. Jay Nixon created the Ferguson Commission, a volunteer group of activists, educators, police officers and other St. Louis citizens. "To look at the underlying, multifactored reasons for the unrest. Not just to look at police, but to look at economic opportunity, to look at education, to look at a variety of different areas," Isom explained.

"I commit to you today these tireless efforts will not be in vain," Gov. Nixon said.

"People would say, you know, 'This Ferguson Commission is just for the political cover; nothing's going to happen. I'm skeptical about it,'" Isom said.

He and the other 15 members of the commission produced a 189-page report with more than 45 recommendations ranging from police reform to education. Critics said it wouldn't be much more than a paper weight for the Ferguson community.

"I always put it back on anyone who says that to me: 'What are you going to do now?' ... Sixteen people on a commission are not going to be able to implement 189 recommendations on their own," Isom said.

After the report was released, the commission created Forward Through Ferguson — a separate organization to help monitor the progress of all these recommendations and establish partnerships in the community to get them implemented.

But nine months later, these recommendations remain a distant wish for the Ferguson Commission and the community. Isom says Forward Through Ferguson is still working to "find its way," and he hopes it can select permanent board members to run the organization.

"Well, what I haven't seen is that sit-down at the table together. And I think that needs to happen. ... Not just say we're going to do it, but let's put it in writing that this is what we're going to do and have a way of measuring it, looking at progress over time," Isom said.

Forward Through Ferguson has developed a partnership with FOCUS St. Louis, but neither group has picked a recommendation from the report to focus on.

"So it is a challenging, daunting task. I'm not saying it's not. But, I mean, you have to be sort of optimistic that you can make at least some progress," Isom said.