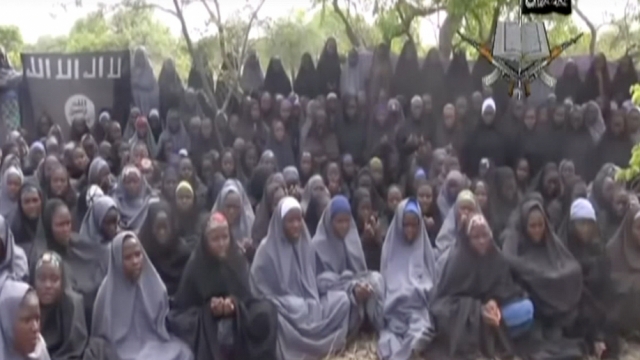 SMS
2 Years After Her Kidnapping, A Chibok Schoolgirl Has Returned Home
By Melissa Prax
By Melissa Prax
May 18, 2016
She is the first of her classmates to be rescued since militant group Boko Haram captured 276 girls from a school in April 2014.
SHOW TRANSCRIPT

It's been over two years since they were kidnapped, but one of the Nigerian Chibok girls is now safe.

Boko Haram took 276 girls from a school in April 2014, and she's the first of her classmates to be rescued.

Others have escaped, like the dozens who reportedly fled a few hours after the abduction. The majority of the girls are still missing and are believed to have been in captivity since then.

"We thought they were soldiers, ... and my friends and I jumped from the vehicle and ran back home," said one of the 50 or so girls who initially escaped.

While some were unsure if any of the captured girls were still alive, two months ago, a video showed more than a dozen who said they were kidnapped from the Chibok school.

The kidnapping prompted the #BringBackOurGirls movement across the globe.

"Whenever I think of my daughter, I start shaking, like I have a fever," a father of one of the missing girls said.

From the beginning of 2014 to the one-year anniversary of the Chibok girl's abduction, Amnesty International said Boko Haram captured more than 2,000 females.

And almost a year after the Chibok girls abduction, Boko Haram militants captured nearly 400 women and children from Damasak, Nigeria — many were students. Those kidnapped have yet to be located.