2 Women Passed Army Ranger School; Here's How Hard It Is 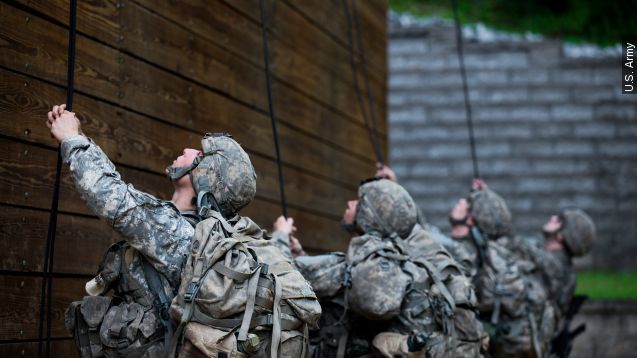 The 61-day course consists of three phases. Phase one is called "Benning." Some of the tasks that have to be completed include the Combat Water Survival Assessment (CWSA), the Worm Pit and a 12-mile march with 35 pounds worth of gear. Only 50 percent of Ranger students complete the first phase.

Phase 2 is called "mountain," and it consists of four days of mountaineering training and another four days of combat technique training. Army officials test this training with "combat patrol missions."

According to the U.S. Army, "Patrol missions are conducted both day and night and include Air Assault Operations and extensive cross country movements through mountainous terrain."

Phase 3 is called "Florida" because it takes place at Camp Rudder near Valparaiso, Florida. Ranger students parachute in for the final phase. Camp Rudder is known for its extreme humidity, venomous snakes and crocodiles.

The two female and 94 male graduates started in a class of 400 soldiers. Soldiers navigate the entire grueling two-month course on two meals per day and very little sleep.

Army Secretary John McHugh said in regards to the historic women graduates: "This course has proven that every Soldier, regardless of gender, can achieve his or her full potential. We owe Soldiers the opportunity to serve successfully in any position where they are qualified and capable."

This video includes images and music from the U.S. Army.