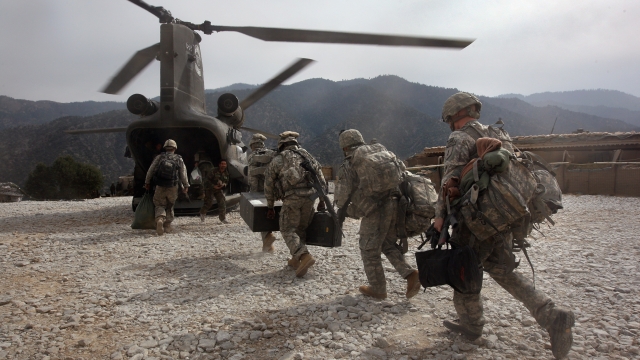 The news came after Secretary of State Mike Pompeo said the Trump administration wants to reduce troops in Afghanistan before the 2020 election.

Two U.S. service members were killed in Afghanistan on Monday.

The U.S. military did not provide any more details, pending the notification of next of kin. But the Kandahar province's police chief told multiple outlets that the two American soldiers were killed when an Afghan soldier opened fire on them.

Their deaths bring the total number of U.S. service members killed in Afghanistan this year to at least 14.

News of their deaths came the same day Secretary of State Mike Pompeo said President Trump has directed him to reduce the number of U.S. troops in Afghanistan before the 2020 election.

"He's been unambiguous: End the endless wars, draw down, reduce. ... We think there's a path to reduce violence, achieve reconciliation, and still make sure that the American counterterrorism effort in Afghanistan has a value and the potential to reduce risk here in the States," Pompeo said while speaking at the Economic Club of Washington, D.C.

About 14,000 U.S. troops are stationed in Afghanistan. Most of them are there as part of a NATO mission called Resolute Support, which is focused on training, advising and assisting Afghan forces fighting the Taliban.

Negotiators for the U.S. and the Taliban are set to resume peace talks this week in Qatar. It'll be the eighth round of direct talks between the two sides since October.

Pompeo previously told reporters that he hoped the two sides would reach a deal before the beginning of September.