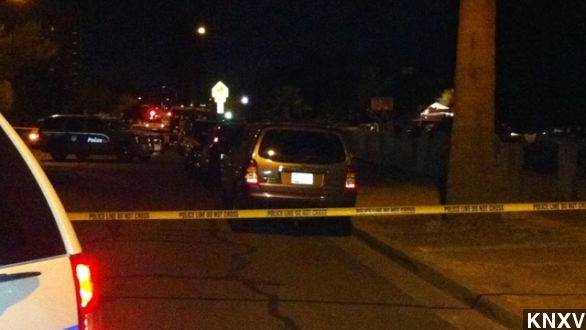 By Cliff Judy
June 12, 2014
One priest is dead and another critically injured after someone shot them late Wednesday night. The priests had called 911 to report a burglary.
SHOW TRANSCRIPT

One priest is dead and another critically injured after a shooting at a Phoenix Catholic church. Police tell KNXV one of the victims tried to call in a burglary late Wednesday night.

A spokesman for the Phoenix Police Department confirmed early Thursday homicide detectives wanted more information on the suspect or suspects, who hadn't been caught yet. (Via Twitter / @SgtMartos)

ANGIE HOLDSWORTH, KNXV REPORTER: "When police finally did arrive, they found that one priest had been shot to death and the other had been badly beaten. Now, at that point, they were able to trace a car."

KPRC ANCHOR: "Officers found the two men when they responded to reports of a burglary at the Mother of Mercy Mission."

Mother of Mercy is in downtown Phoenix, and police say the burglary call went out around 9 p.m.

KNXV reports the priest who died was 28-year-old Father Kenneth Walker. He's on the left. The man on the right Father Joseph Terra called in the burglary and is in critical condition at a local hospital.

An update early Thursday morning showed police found that vehicle, but they were still looking for whoever attacked the two priests. (Via Twitter / @abc15)