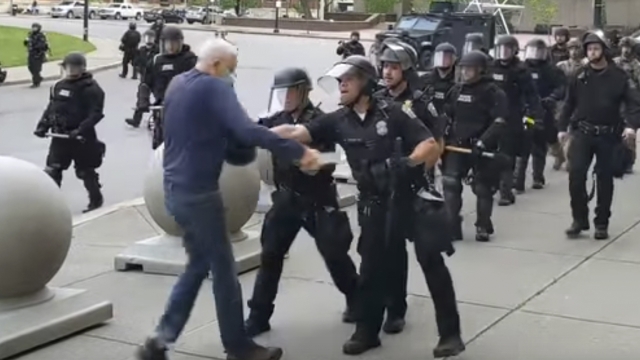 SMS
2 Buffalo Officers Seen Shoving Man In Video Are Charged With Assault
By LeeAnne Lowry
By LeeAnne Lowry
June 6, 2020
The officers were released without bail and will appear in court next month.
SHOW TRANSCRIPT

We want to warn you, some of the images in this video are graphic.

Two Buffalo police officers who were caught on video appearing to shove a 75-year-old man to the ground during a protest on Thursday have been charged.

The county's district attorney announced Saturday that officers Robert McCabe and Aaron Torgalski each face one count of second-degree assault.

Both men pleaded not guilty. They were released without bail and will appear in court next month. If found guilty, they could face up to seven years in prison.

The D.A. said the charge is more severe because the law stipulates that if the victim is over 65 years old and the perpetrator is at least 10 years younger, it's a felony.

The officers were suspended without pay after video of the incident went viral.

McCabe and Torgalski were part of the Buffalo Police Department's Emergency Response Team. Following the suspension, the entire team of 57 officers quit the unit, but not their jobs on the force.