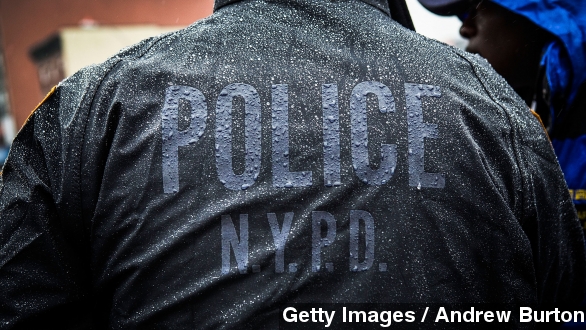 By Cliff Judy
January 6, 2015
Police say two officers responding to a robbery call were shot Monday night, but both men are expected to survive.
SHOW TRANSCRIPT

Another tense night for the NYPD as police say one suspect shot two New York City police officers. As of Tuesday morning, doctors and police officials said the two wounded officers were expected to survive.

Police say the officers were part of a five-member team nearing the end of their shift Monday night when they responded to a call of a grocery store robbery in the Bronx. They spotted two suspects outside a nearby restaurant. (Video via WNYW)

This is surveillance video NYPD released from that restaurant. Police say one suspect initially went inside when officers approached but then ran out and opened fire, hitting a 30-year-old officer and 38-year-old officer. (Video via New York City Police Department via WNBC)

Police say the suspects then ran and carjacked a white Camaro, and a manhunt began immediately. (Video via WCBS)

All of this comes at a time of enormous tension between police, City Hall and protesters in New York. The July choking death of Eric Garner by an NYPD officer combined with nationwide protests over Ferguson, Missouri preceeded December's violence.

That's when two officers in Brooklyn, Wenjian Liu and Rafael Ramos, were ambushed while sitting in their patrol cars by a man family members said suffered from mental illness. (Video via CNN)

Some officers criticized Mayor Bill de Blasio for allowing protests they believed stoked anti-police sentiment and contributed to Officers Liu and Ramos' deaths, and many turned their backs on him during the officers' funerals. (Video via ABC)

Police have made it clear the officers shot Monday were responding to a call of a crime in progress and not initially targeted by the gunman. Mayor de Blasio spoke of their bravery overnight.