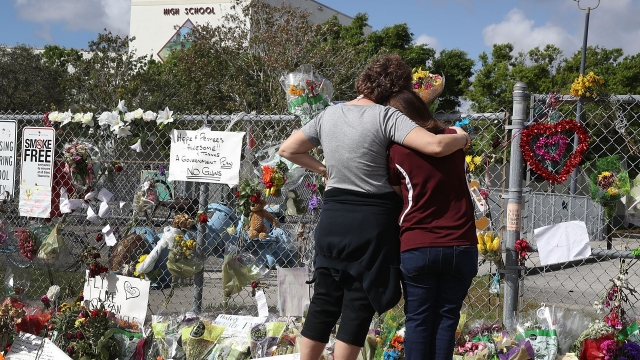 SMS
2 More Officers Fired Over Response During Parkland Shooting
By Ahmed Jawadi
By Ahmed Jawadi
June 26, 2019
​The two sheriff's deputies were fired after an internal affairs investigation into the department's response to the shooting.
SHOW TRANSCRIPT

Two more officers have been fired for their inaction during last year's shooting at Marjory Stoneman Douglas High School in Parkland, Florida.

During a press conference on Wednesday, Broward County Sheriff Gregory Tony announced the deputies had been fired following an internal affairs investigation into the department's response to the shooting. Tony said the officers were fired for neglect of duty.

According to the investigation report, one of the officers was working an off-duty shift at another school when he responded to reports of shots fired at Stoneman Douglas. Once he arrived, he put on his bulletproof vest and took cover for about five minutes after hearing shots. He then got back in his vehicle and drove to a nearby highway.

The other officer reportedly ran away, then spent time putting on his bulletproof vest and body camera while the shooting continued. He was also faulted for not writing an official report after receiving a tip that the shooting suspect, Nikolas Cruz, had made threats against the school on social media.

The school's resource officer, Scot Peterson, and another officer were already fired earlier this month. Peterson's also been charged with seven counts of child neglect, three counts of culpable negligence and one count of perjury.