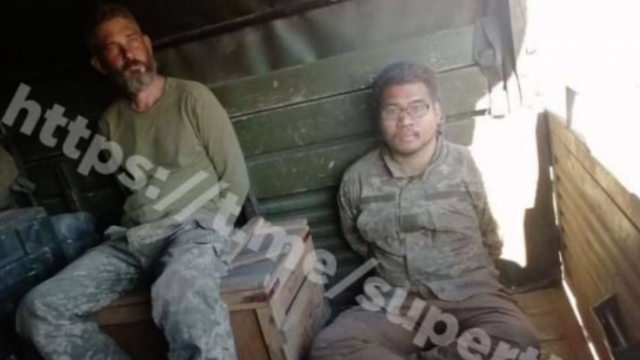 SMS
2 Missing Americans Found In Russian Captivity May Get Death Penalty
By Jason Bellini
By Jason Bellini
June 20, 2022
The Kremlin said the two men had been involved in firing on Russian forces and should be "held responsible for the crimes they have committed."

Two U.S. military veterans taken prisoner while fighting for Ukraine appear in a video airing on Russian TV, apparently in the custody of pro-Russian separatists. In the audio, the two Americans, Alexander John-Robert Drueke and Andy Tai Ngoc Huynh seemed to have spoken under duress.

Pundits on Russian state TV are speculating that the two soldiers will get the death penalty, saying “there are no other options” because Russia considers foreign fighters to be mercenaries.

The men’s families say the State Department is closely monitoring the situation.

“The State Department keeps us informed all through the day," said Bunny Drueke, mother of Alexander John-Robert Drueke. "I have every confidence in that. As Coach Saban tells the Crimson Tide fans, trust the process, and that's what we're doing."

The two Americans were captured while fighting north of Kharkiv, with a unit of American and French fighters called “Task Force Baguette.” On social media, the unit, which was attached to a Ukrainian military unit, says the men were captured when their “team ended up isolated in the middle of a Russian offensive.”

Like many of the foreign units fighting in Ukraine, Task Force Baguette posts on social media, including a Tik Tok of their team set to music.

In other videos they’ve posted, the unit shows off their equipment. Some of it is donated, but others are standard Ukrainian and advanced western weaponry.

Still, the uniforms are not standardized. The personnel carriers aren’t armored. They have repurposed pickup trucks and SUVs, some of them donated by volunteer organizations.

At least one of the men went to Ukraine not intending to fight. Huynh’s fiance says when he went to Ukraine, his plan wasn’t to join a group like Baguette.

“He did not go intending to fight," said Joy Black, fiancé of Andy Tai Ngoc Huynh. "Once he had decided he was definitely going to go, he just knew that he wanted to help any way that he could, whether it was humanitarian, passing out water, anything like that."

U.S. officials have have revealed a third American, who also told friends before going to Ukraine that he didn’t plan to fight, is listed by the State Department as of April 28 as missing in action.