2 Massive Beer Companies Are Talking About A Massive Merger 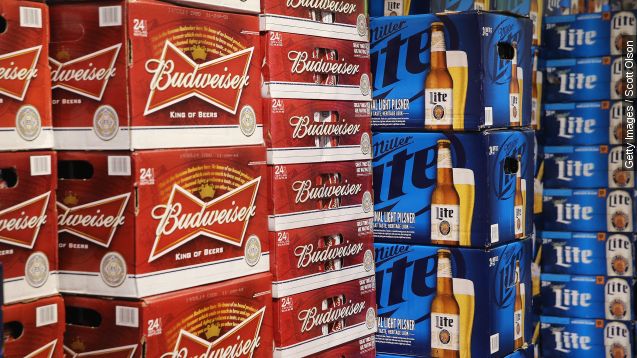 SMS
2 Massive Beer Companies Are Talking About A Massive Merger
By Matt Moreno
By Matt Moreno
September 16, 2015
SABMiller announced Anheuser-Busch InBev is interested in buying the company. The merger would create one of the largest corporations ever.
SHOW TRANSCRIPT

As if Anheuser-Busch InBev and SABMiller weren't big enough household names by themselves, the two beer-brewing companies might soon join forces. (Video via Bud Light)

AB InBev has notified SABMiller of a potential plan to acquire the fierce rival, according to a stock exchange statement from SABMiller.

Now, the company said no proposal is on the table and no deal is certain. But if one does go through, it'd create one of the most massive companies in history. (Video via AB InBev News)

The combination would make for a company worth between $245 billion and $275 billion and, according to The Financial Times, would account for one of every three beers produced worldwide.

Which is clearly a huge hold on the market and could be enough to dictate prices — something that could be a red flag to some regulators. (Video via Shock Top)

If a deal goes through, both companies would likely need to divest some of their major brands for antitrust purposes, with Coors being one of the most likely candidates. (Video via Coors)

SABMiller announced stockholders should take no action on their shares for now. The company has given AB InBev a deadline of Oct. 14 to announce a firmer commitment or to say there's no offer. (Video via Goose Island)