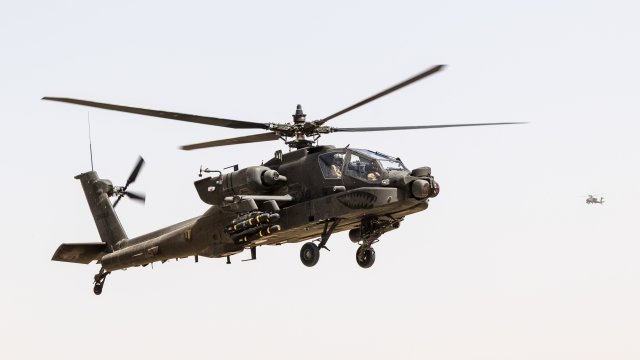 SMS
2 Soldiers Killed In 5th Military Aircraft Accident This Month
By Jake Jones
By Jake Jones
April 7, 2018
Authorities said the identities of the two soldiers will be released after their next of kin are notified.
SHOW TRANSCRIPT

Two U.S. soldiers died in a helicopter crash Friday at a training area in Kentucky.

The crash is under investigation. Authorities said the identities of the two soldiers will be released after their next of kin are notified.

The announcement from Fort Campbell comes after a string of military aircraft accidents so far in 2018:

On Wednesday, a U.S. Air Force fighter jet crashed at Nellis Air Force Base in Nevada during a training flight, killing the pilot.

The U.S. military paused air operations in the East African country Djibouti after a request from the local government. That's after a U.S. Marine Corps jet crashed at the country's international airport and a Marine Corps helicopter sustained "minor damage" Tuesday.

Four Marines also died when a helicopter crashed during a training mission in Southern California. That also happened Tuesday.

And in March, two Navy pilots died when their fighter jet crashed in Florida. A day later, seven service members died in an Air Force helicopter crash in Iraq.

A Pentagon official denied that there is a "crisis" for military aviation.