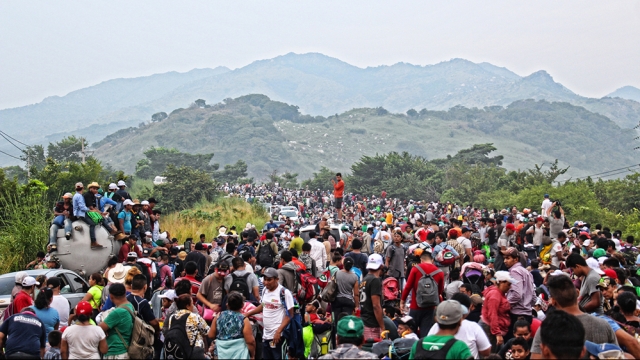 After conflicting court rulings, tens of thousands of migrants fleeing Central America can once again petition for asylum in the U.S. But the fate of a strict Trump administration policy may ultimately rest with the Supreme Court.

Late Wednesday, a San Francisco federal judge blocked a July 15 administration order that aimed to sharply curb migration from troubled Central American countries. The new rule said people who sought refuge based on fears of violence or persecution could not submit their first asylum application in the U.S. if they traveled through Mexico or another country to reach its border.

But U.S. District Judge Jon Tigar granted an injunction to halt the policy, declaring its foundation was "arbitrary and capricious." He added, "The new rule is likely invalid because it is inconsistent with existing asylum laws."

Earlier on Wednesday, a federal judge in Washington, D.C., had allowed the new asylum policy to stand. The disparate rulings are expected to trigger legal appeals to higher courts, with the Supreme Court the potential ultimate decider.

Judge Timothy Kelly denied petitions by advocacy organizations asking him to block the Trump administration's order, which could effectively prevent migrants from Honduras, Guatemala and El Salvador from obtaining refuge in the U.S.

More than 360,000 people from those three countries attempted to enter the U.S. since last October, many citing fear of violence at home. They lined up at legal ports of entry or crossed elsewhere, often surrendering to Border Patrol agents in hopes of remaining in the U.S. while applying for asylum.

But the new Trump administration rule said they'd have to seek asylum in Mexico or another country they passed through on their way to the U.S. border. They would only be allowed to apply for asylum in the U.S. if they were denied elsewhere.

The U.N.'s high commissioner for refugees had already condemned the new asylum rules.

Filippo Grandi suggested the policy complicates a humanitarian crisis in Central America and along the U.S. border.

He said: "It will put vulnerable families at risk. It will undermine efforts by countries across the region to devise the coherent, collective responses that are needed."

But acting Homeland Security Secretary Kevin McAleenan says the new asylum rules are appropriate. He says the old policies inspired migrants to make perilous journeys to the U.S. in the hands of smugglers and criminal organizations.

He said, "Folks are incentivized by the gaps in our legal framework to come to the United States right now."

Before the new rule, immigration advocates said 40% of applicants were granted asylum in the U.S. The Trump administration said the acceptance rate was closer to 20%.