2 Jailed Al Jazeera Journalists In Egypt Have Been Pardoned 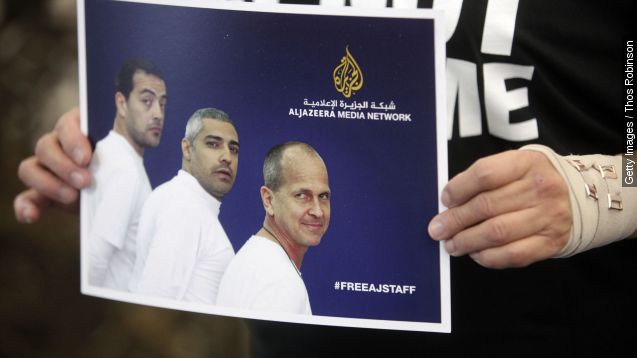 SMS
2 Jailed Al Jazeera Journalists In Egypt Have Been Pardoned
By Jake Godin
By Jake Godin
September 23, 2015
Two of Al Jazeera's jailed journalists in Egypt received pardons Wednesday from the country's president ahead of his visit to the United Nations.
SHOW TRANSCRIPT

Two Al Jazeera journalists jailed in Egypt have been pardoned by the Egyptian president.

Mohamed Fahmy, a Canadian citizen, and Baher Mohamed, an Egyptian, were pardoned Wednesday as part of a presidential decree. (Video via CBC)

Egyptian President Abdel Fattah al-Sisi pardoned a total of 100 prisoners ahead of his visit to the United Nations and the Muslim Eid holiday. (Video via United Nations)

It's unclear if a third Al Jazeera journalist Peter Greste received a pardon. The Australian was deported earlier this year and tried in absentia.

All three journalists received three-year sentences last month for allegedly working with the outlawed Muslim Brotherhood in 2013 — something they deny.