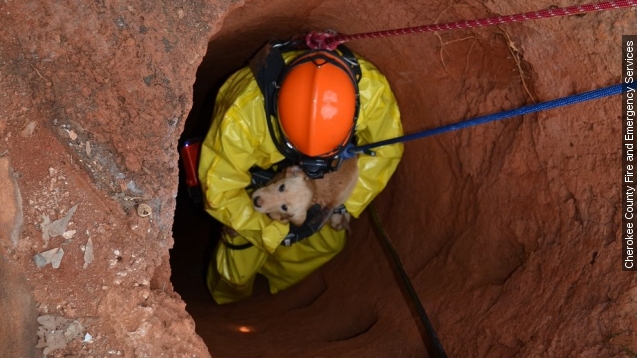 We're bringing you a two-for-one deal. Two different tales about two different firefighters successfully rescuing dogs, all in one story. Aren't you so lucky? Maybe we'll even throw in a cat one for you, too.

First we take you to Georgia. A Cherokee County Fire and Emergency Services firefighter went into a 75-foot-deep well to rescue a yellow labrador puppy. It was discovered when an adult black lab started barking. Don't worry though, the pup was fine.

According to the emergency services Facebook page, firefighters had to construct a tripod above the well hole and lower down a firefighter, who was then raised back up while holding the puppy.

A local animal shelter now has the two dogs, and a neighbor who lives nearby is potentially interested in adopting them both if the owner isn't found.

And in Utah, a Salt Lake City Fire Department firefighter carried a dog to safety on his back. And it wasn't just a short stroll in the park.

"The dog had an injured paw, and he wasn't moving, so firefighters hiked more than two miles," a KSL-TV anchor said.

"The rescue took about 45 minutes. Fire crews believe Rue escaped out of his yard," another anchor said.

Rue was successfully reunited with his owner.

And it doesn't end with humankind's best friend. North Carolina firefighters from the Charlotte Fire Department also recently rescued a kitten from an apartment fire.