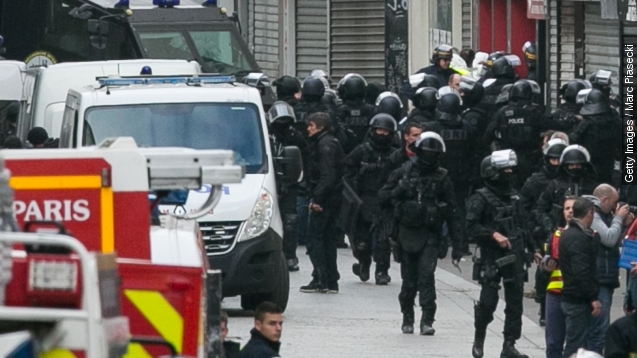 SMS
2 Dead, 7 Arrested After Police Raid North Of Paris
By Ben Lawson
By Ben Lawson
November 18, 2015
Two people were killed and seven were arrested in a police raid in Paris Wednesday as the manhunt for the suspects from Friday's attacks continued.
SHOW TRANSCRIPT

Two people were killed and seven were arrested in a police raid in Paris Wednesday morning as the manhunt for the suspects from Friday's attacks continued.

Authorities say one person killed was a female who blew herself up with a suicide belt during the raid, and the other was shot by police. Five officers were injured, and a police dog was killed. (Video via iTELE)

The target was Abdelhamid Abaaoud, a 26-year-old Belgian jihadist who authorities believe was the mastermind of the attacks. It's still not clear if he was one of the seven arrested. (Video via France24)

The raid lasted several hours and took place in Saint-Denis, a Paris suburb not far from the soccer stadium targeted in Friday's attacks. Witnesses reported hearing intense gunfire throughout the raid.

Europe has barely had a chance to catch its breath after Friday's deadly attacks.

On Tuesday, two Air France passenger jets headed for Paris from the U.S. were forced to make an unscheduled landing due to bomb threats.

Also on Tuesday, a soccer stadium filled with people in Germany had to be evacuated due to a bomb threat.

One hundred twenty-nine people were killed in Friday's attacks in Paris, and more than 400 people were wounded.